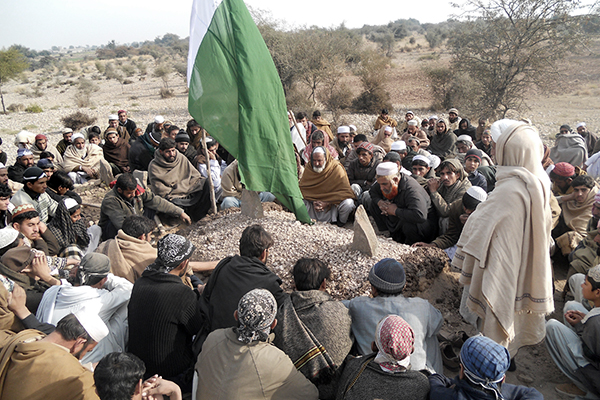 The funeral in Kohat of a soldier killed in Sunday’s Bannu attack. Basit Shah—AFP

The dead include suicide-bomber trainer Wali Muhammad and 36 foreign militants.

Some 36 suspected foreign militants—three Germans and 33 Uzbeks—were among the 40 people killed during the Pakistani military’s jet and helicopter campaign in the North Waziristan tribal agency on Tuesday, a senior security source said late Wednesday.

The campaign targeting Taliban hideouts in the restive agency came after the militants launched back-to-back attacks against security personnel in Bannu on Sunday and Rawalpindi on Monday. “Most of the terrorists killed are foreign fighters,” said the security source, adding that the dead also included Wali Muhammad, a Pakistani Taliban commander and trainer of suicide bombers. Wali Muhammad’s death has also been confirmed by a senior militant source.

Security officials said some of those killed were linked the Bannu attack, which killed 26, and to the double suicide bombing on a church in September that killed more than 80.

Tuesday’s military operation was one of the heaviest bombardments in recent years in North Waziristan, a key stronghold of militants linked to the Taliban and Al Qaeda. Uzbeks, many affiliated with Al Qaeda-linked Islamic Movement of Uzbekistan, make up one of the largest groups of foreign fighters in Pakistan’s tribal northwest. There was no immediate confirmation about the casualties from the countries concerned. Independent verification of casualties was not possible because media and aid workers are not allowed to visit the area.

Another military official said a few families had fled the fighting and moved out of the tribal areas, but so far there has been no mass migration. Government officials said that around 500 families fled to Bannu district from North Waziristan after the bombardment.

“Some 500 families from Mir Ali subdivision of North Waziristan have migrated to Bannu. They are living with the local host tribes of Mamashkhel and Bakakhel in Bannu,” said Arshad Khan, head of the FATA Disaster Management Authority.