Pakistani Mother Begs to be Reunited With Son Stuck in India 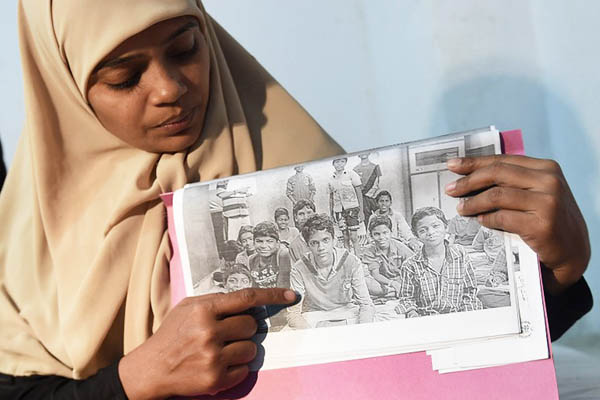 Indian authorities say they are waiting for Pakistan to make a formal repatriation request.

A Pakistani mother whose son has been stuck in India for years begged Friday for them to be reunited after they made contact last month for the first time since 2008.

In a story mirroring that of Geeta, the deaf-mute Indian woman who returned to Delhi this week after spending more than 10 years trapped in Pakistan, Mohammad Ramazan wandered into India years ago without a passport and has been trapped there ever since. Around six weeks ago his mother Razia Begum, who lives in Karachi, stumbled across his story and photograph on the Internet.

Now 15, Ramazan was found by the charity Childline in Bhopal, capital of Madhya Pradesh state, two years ago and has been cared for by them ever since. “When I heard about him, well… I can not express in words my immense affection as a mother,” his mother told AFP tearfully on Friday. “For so many years he has been far from me. I earnestly desire that he should live with me now,” she said.

Ramazan’s parents divorced in 2004, and his father took him to Bangladesh in 2008 without his mother’s knowledge, she said. Claiming he was abused by his father and stepmother, Ramazan ran away, straying into India where he wandered from town to town, sleeping and eating at shrines and railway stations before being picked up by Childline in Bhopal.

Childline Director Archana Sahay told AFP this week that Ramazan speaks regularly with his mother since they made contact a month ago, and the pair has exchanged videos and photographs. Ramazan’s identity has been established “beyond any doubt,” Sahay said.

She said the Indian government has told the charity they are waiting for Pakistan to put in a formal request for his repatriation.

In Pakistan, the Ansar Burney Trust has requested the government’s help in bringing Ramazan home, the human rights organization’s director Shagufta Burney told AFP Friday. “Only a border is in between… there should be flexibility so that the child can reunite with his mother,” Burney said.

“When I speak to my mother, we both cry,” Ramazan told AFP in Bhopal. “I want to go back to my home as soon as possible… I want to be with my mother.”

“Just like Geeta came to India, I will be sent to Pakistan.”

The deaf-mute woman known only as Geeta has been unable to identify herself or her family since she was found by police in Lahore after wandering across one of the world’s most militarized borders from India into Pakistan. Believed to now be in her early 20s, on Monday she returned to Delhi for the first time to be reunited with what she thought was her family—only to not recognize them when they finally came face to face.

Indian officials have said she will be placed in an institution while they continue to search for her relatives.

Begum said Kabeer Khan, the film’s director, had heard of her son’s story and contacted him to see if he wanted to meet Salman Khan. “Ramazan told him he only wants to see his mother and he would be grateful to Salman Khan if he could facilitate that,” she said.