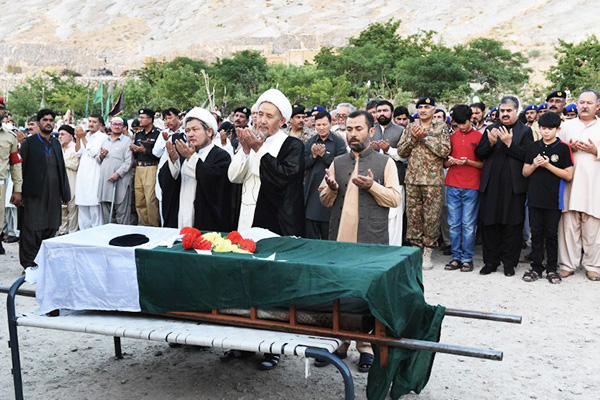 Conflict over gate construction at Pakistan side of Torkham also led to deaths of two Afghan policemen.

A Pakistani military official died on Tuesday morning after being injured in clashes between Afghan and Pakistani forces, according to officials.

The fighting erupted along the Torkham border on Sunday night and continued erratically over the next two days, apparently after Afghan forces objected to the construction of a gate on the Pakistani side. The conflict prompted bitter recriminations on both sides, with Islamabad and Kabul summoning each other’s diplomats to lodge strong formal complaints.

Pakistan Army Major Ali Jawad Changezi was killed and 18 others, many of them civilians, were wounded, security officials in Peshawar said. Changezi succumbed to his wounds on Tuesday morning. His funeral was attended by senior military officials, including Army chief Gen. Raheel Sharif.

Two Afghan policemen were also killed and nine others wounded in gunfights since Sunday, said Mohammad Ayub Hussain Khil, border police chief in eastern Afghanistan. “The firing continued till 7:00 a.m. [Tuesday]. The border is now closed until the tension subsides,” he told AFP.

The Pakistani military justified the construction of the gate at Torkham, saying “terrorists” were using the busy crossing point. “In order to check movement of terrorists through Torkham, Pakistan is constructing a gate on [our] own side of the border as a necessity to check unwanted and illegal movement,” the military said in a statement on Monday.

Torkham is one of the major crossings between Afghanistan and Pakistan, where hundreds of trucks and thousands of people cross the border daily through the Khyber Pass. The border was closed over similar clashes last month, but was reopened after an understanding was reached between the two countries.