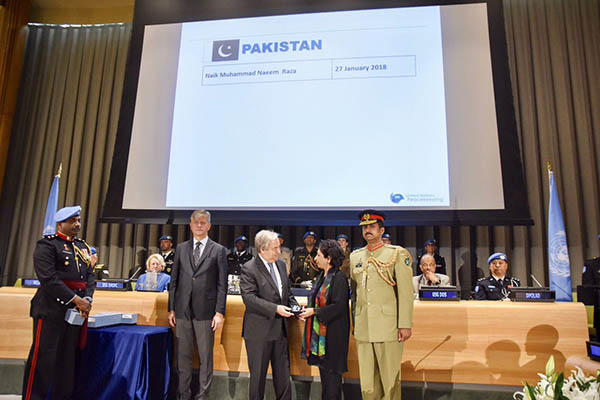 The United Nations on Friday honored 119 soldiers, police and civilians from 38 countries who lost their lives in 2018 and early 2019 while serving in U.N. peacekeeping operations around the world.

U.N. Secretary General Antonio Guterres led the ceremony at U.N. Headquarters in New York in which the Dag Hammarskjold Medal was awarded posthumously to the men and women who died for the sake of peace.

“Today we honor the more than one million men and women who have served as U.N. peacekeepers since our first mission in 1948. We remember the more than 3,800 personnel who paid the ultimate price. And we express our deepest gratitude to the 100,000 civilian, police and military peacekeepers deployed around the world today and to the countries that contribute these brave and dedicated women and men,” Guterres told the gathering that coincided with the annual International Day of Peacekeepers.

Pakistan’s Permanent Representative to the United Nations, Ambassador Maleeha Lodhi, accepted the award for Naik Muhammad Naeem Raza on behalf of his family. Raza was shot dead in the Democratic Republic of Congo while deployed on a Stabilization Mission.

“This medal to our hero Naik Muhammad Naeem Raza is recognition by the U.N. secretary general of the sacrifice, dedication and professionalism of Pakistan’s peacekeepers,” Ambassador Lodhi told APP after the ceremony. “Pakistani peacekeepers continue to serve U.N. peacekeeping missions with distinction and fly the flag of Pakistan high. Their sacrifices are testimony to Pakistan’s commitment to uphold international peace and security,” she added.

Pakistan is currently the sixth largest contributor of uniformed personnel to U.N. peacekeeping operations with over 5,200 military and police personnel serving in the Central African Republic, Cyprus, the Democratic Republic of the Congo, Mali, Somalia, Sudan, South Sudan and the Western Sahara.