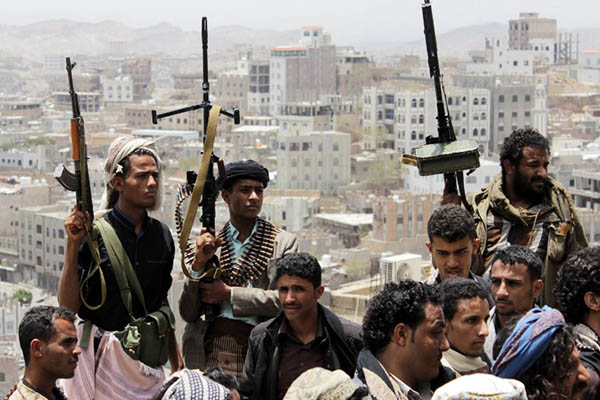 Missiles reportedly fired by rebels hit a school and residential neighborhood in Najran, resulting in the Pakistani national’s death.

A Pakistani and a Saudi were killed on Monday when the Saudi Arabian border region came under renewed bombardment from Yemen, official media reported.

The Pakistani’s killing was a rare death of a foreigner during weeks of war the United Nations says have killed more than 1,400 people in Yemen.

SPA said the latest barrage came from inside Yemen.

Shahrani said it also wounded a Saudi child and three civilians “of different nationalities.” Saudi news channel Al-Ekhbariya showed footage of a building with its brickwork blown out, a shattered storefront and what appeared to be remains of a rocket.

A Pakistani official confirmed to AFP that one of his country’s nationals had died. “We are ascertaining from Saudi authorities the details about the victim’s identity,” said the official, asking for anonymity.

Later Monday, a residential area of Jazan district adjacent to Najran also came under attack, SPA said. Civil defense Major Yahya al-Qahtan was quoted as saying one citizen was killed and four people, including three foreigners, were wounded by missile fire on a border village in Harth municipality.

A husband and wife died in the same municipality last Tuesday when the cross-border bombardments began.

Twelve people on the Saudi side of the boundary have now been killed since Shia Houthi rebels in Yemen began firing the rockets and mortar rounds.

The Saudi-led coalition, which has been bombing the Houthis since March 26, said on Thursday that they had crossed a “red line” with their deadly cross-border fire.

The coalition retaliated by declaring the whole of Saada province—a Houthi stronghold on the border—a military target and pounding it with airstrikes and artillery.

Brigadier General Ahmed al-Assiri, the coalition spokesman, told AFP on Sunday that the retaliatory raids would continue right up to the proposed 11:00 p.m. Tuesday start-time for a five-day ceasefire, “if they continue to fire their rockets towards our cities, our population.”

Saudi Arabia made the ceasefire offer on Friday after more than six weeks of airstrikes but said the rebels would also have to abide by it.