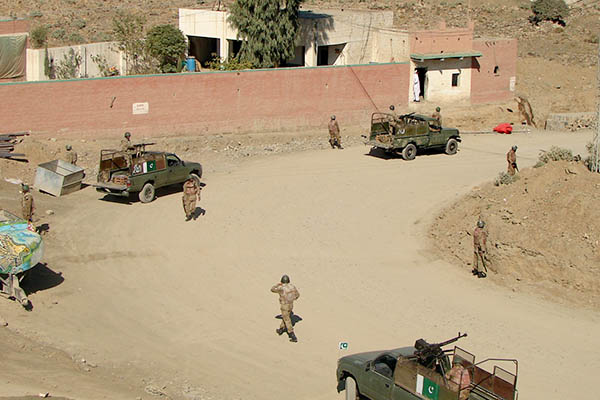 A roadside bomb killed nine Pakistani soldiers and wounded 19 others Sunday in a restive northwestern tribal region near the Afghan border, officials said.

The incident happened in the Boya area of North Waziristan, a stronghold of militants linked to the Taliban and Al Qaeda.

“At least nine soldiers embraced shahadat (martyrdom) and 19 others were injured in an explosion caused by an improvised explosive device,” according to a senior security official.

The bomb hit one of the vehicles in a convoy of up to 20 carrying regular soldiers and members of the paramilitary Frontier Corps to the town of Miranshah from the Datta Khel area, he said. Another security official confirmed the toll.

Pakistan is battling a Taliban-led domestic insurgency that has killed thousands of civilians and security personnel since 2007.

Troops have been fighting for years against homegrown insurgents in the tribal belt, which Washington also considers the main hub of Taliban and Al Qaeda militants plotting attacks on the West and in Afghanistan. North Waziristan is frequently targeted by U.S. drones. A drone strike on Saturday on a compound in the Heso Khel area killed at least four militants.