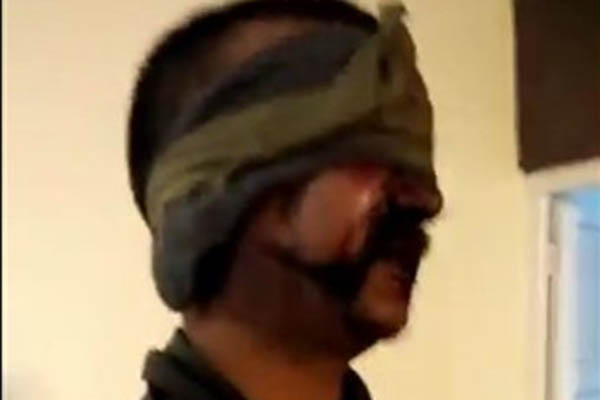 The video, yet to be confirmed by the military, shows a blindfolded man in an Indian Air Force uniform

Pakistani state media on Wednesday released a video purportedly showing a captured Indian fighter pilot being interrogated after his jet was shot down when it entered Pakistani airspace in Kashmir.

Two Pakistani security sources told AFP the video was authentic, although the military has not yet officially confirmed it.

The video shows a blindfolded man in an Indian Air Force uniform, his face bloodied, with his hands tied behind him, as a soldier interrogates him. He gives his name, rank and serial number and when pressed for further information says, “I am not supposed to tell you that.”

In a photograph, which has also been confirmed by security sources, the pilot can be seen flanked by Pakistani military personnel.

Both Pakistan and India on Wednesday claimed they had shot down each other’s warplanes, in a dramatic escalation of the dangerous confrontation between the nuclear-armed rivals.

Islamabad said it downed two Indian jets in its airspace and captured two pilots, but insisted it does not “want to go toward war” with its neighbor. Pakistani military spokesman Major General Asif Ghafoor said one of the downed Indian planes had fallen in Pakistan-administered Kashmir, while the other came down in Indian-Occupied Kashmir.

He said one of the captured pilots was in custody and the other was in hospital.

The Indian foreign ministry said only one of its planes had been shot down. “In this engagement, we have unfortunately lost one Mig-21. The pilot is missing in action. Pakistan has claimed that he is in their custody,” said Indian foreign ministry spokesman Rajeesh Kumar. He also said a Pakistani jet had been shot down by Indian forces. Pakistan denied that any of its planes have been downed.