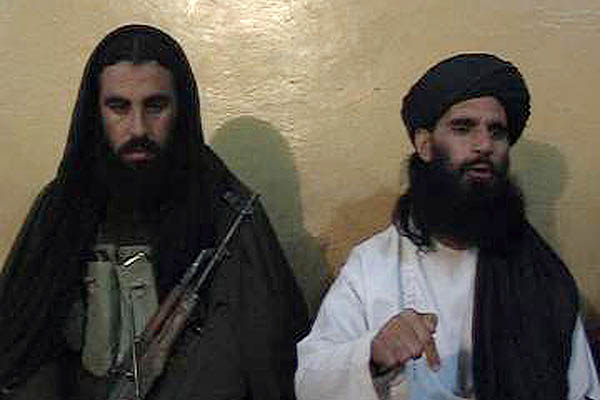 The Pakistani Taliban appointed a hardline cleric linked to the attack on Malala Yousafzai as their new chief Thursday and dismissed proposed peace talks with the government as a “waste of time.”

Maulana Fazlullah, notorious for leading the militants’ brutal two-year rule in Swat, was elected to replace Hakimullah Mehsud, who was killed in a U.S. drone strike last Friday.

The choice of Fazlullah by the Tehreek-e-Taliban Pakistan (TTP) ruling council appears to have sunk government plans for peace talks to try to end the militants’ bloody six-year insurgency.

TTP spokesman Shahidullah Shahid said the new leader, nicknamed “Mullah Radio” for his fiery speeches over the airwaves, was “against peace talks.”

“Holding of peace talks is not even an issue to discuss—this government has no authority, it is not a sovereign government, it is a slave, a slave of America. Holding peace talks is a waste of time,” he said.

Pakistani intelligence believes Fazlullah is linked to the failed attempt to kill schoolgirl education activist Malala, who was shot in Swat in October 2012. During Fazlullah’s rule in Swat, which began in 2007, the Taliban imposed a rigorous version of Islamic law, publicly beheading and flogging wrongdoers and burning schools.

Fazlullah fled Swat when the Army retook the valley in 2009 and is believed to have been in hiding in the mountains of eastern Afghanistan. Pakistan says he has directed attacks on its soil from across the border. His men were blamed for beheading 17 Pakistani soldiers in a checkpost attack in June 2012, and he appeared in a video posted online in September claiming a bomb blast that killed a major general. In another video he vowed to do whatever it took to enforce shariah law across Pakistan.

“We will eliminate anything that will get in the way of achieving this goal: father or brother, soldier or police, khan or malik (tribal elders) or mullah,” he said in the undated footage.

The TTP’s caretaker leader Asmatullah Shaheen announced the appointment at a press conference in a secret location in North Waziristan, prompting celebratory gunfire in Miranshah, the main town in area.

The TTP, an umbrella organization grouping numerous militant factions, has killed thousands of soldiers, police and civilians since 2007 in its campaign against the Pakistani state.

The killing of Mehsud in North Waziristan on Friday came as government representatives prepared to meet the militants with a view to opening peace talks. It drew an angry response from Islamabad, with Interior Minister Chaudhry Nisar accusing Washington of sabotaging peace efforts.

Prime Minister Nawaz Sharif was more measured, but said his government was committed to seeking peace through dialogue and stressed that an end to bloodshed could not be achieved “by unleashing senseless force.”

Sharif came to power in May partly on a pledge to hold talks to try to end the TTP’s bloody insurgency, which has fuelled instability in the nuclear-armed nation.

Imtiaz Gul, an author and expert on militancy in Pakistan, warned the choice of such an uncompromising leader would mean a bloodier campaign from the TTP.

“The nomination of Fazlullah is a continuation of the terror campaign in Pakistan since the creation of TTP. It means they are not serious about any talks with the government,” he said. “TTP will be more brutal now.”

No clear progress had been made in peace negotiations before the strike on Mehsud, and Shaheen dismissed the whole process as a sham.

“Fazlullah was ousted from Swat valley, his hometown, and he is living in Afghanistan. He is wanted by Pakistan, so can he run the organization smoothly from other side of the Durand Line?” Shah said.

Fazlullah, believed to be about 39, is the first leader not to come from the Mehsud tribe, which dominates the TTP, or even the tribal areas, and Shah said this would weaken the movement’s unity.

“There are other groups based in North Waziristan who were helping the Pakistani Taliban but they won’t help Fazlullah as he can’t even live among them,” he said.

The Taliban’s ruling council took several days to reach a decision, indicating a lack of consensus about who should lead them, but Shaheen insisted the movement was united.