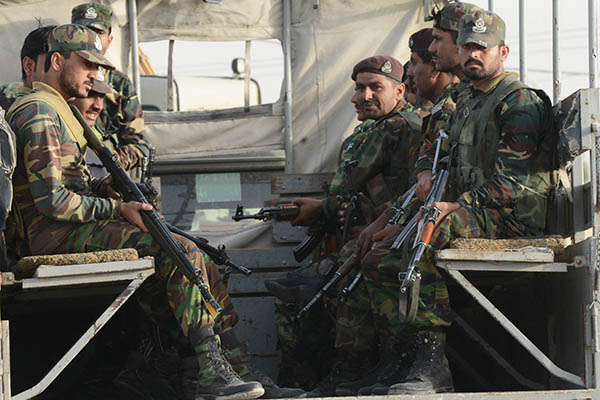 Leader of the Fidayeen-e-Islam faction says the failed attacks were in retaliation to the ongoing Operation Zarb-e-Azb.

Sarfaraz Bugti, the home minister of insurgency-hit Balochistan province, said that militants had tried to storm the Samungli airbase, used by the Pakistan Air Force, and Khalid military airbase, both in the provincial capital Quetta, but had failed to penetrate either perimeter.

“The operation at both the bases is over and eight militants have been killed, five at Samungli and three others at Khalid airbase,” said Col. Maqbool Ahmed, in charge of the operation. “The gun fights with militants, which started overnight around 10:00 p.m. continued till 7:30 a.m., in which seven security forces personnel were also wounded,” he added. The targets of the attacks were the airbases, he said.

Ahmed said that attackers wearing suicide bombs arrived in a Suzuki pickup at the rear of the perimeter of Samungli base adjacent to houses and markets and made a hole in the wall. “When security forces engaged the attackers and fired bullets, they blew themselves up,” he said.

Ahmed said all five men appeared to be of Central Asian or Uzbek origin. “At Khalid base three attackers were killed, two of them carried out suicide bombings,” the colonel said, adding that two suspected militants were also arrested alive, one of them wounded.

A senior military official said rockets were fired at Samungli airbase, with two landing inside the perimeter fence. He said no damage was caused.

Ghalib Mehsud, the leader of the Pakistani Taliban’s Fidayeen-e-Islam faction, claimed responsibility for the failed attack, saying it was in retaliation for the military’s ongoing operation in the North and South Waziristan tribal areas.

Pakistan launched the offensive in mid-June shortly after a brazen attack on Karachi airport that left dozens dead and extinguished a largely fruitless peace process with the Tehreek-e-Taliban Pakistan (TTP). Later that month, gunmen opened fire at a plane landing at Peshawar airport in the country’s northwest, killing a passenger and wounding two crewmembers.

The Pakistani Taliban and the Islamic Movement of Uzbekistan claimed joint responsibility for the Karachi airport attack. North Waziristan has become a major base for the TTP, which rose up against the state in 2007, while the United States has long called for action in the area against militant groups targeting NATO forces in Afghanistan.

More than 500 militants and 29 soldiers have been killed in the offensive so far, according to the military, though the death toll for insurgents cannot be independently confirmed.