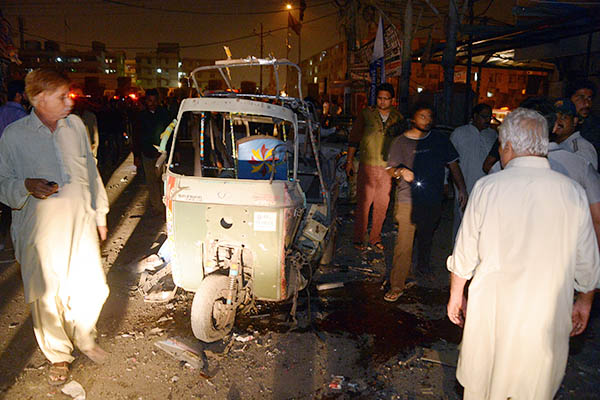 The Pakistani Taliban have claimed responsibility for Friday night’s twin bomb attacks in Karachi that killed at least six people and wounded 35 others.

Shahidullah Shahid, spokesman for the Tehreek-e-Taliban Pakistan, said the attacks were carried out in retaliation for last week’s sectarian violence between Sunnis and the Shia in Rawalpindi. He said the attacks were aimed at the Shia, and vowed further violence: “We will carry out more such attacks to avenge the killing of Sunnis.”

The blasts took place within minutes of each other in Ancholi, a predominantly Shia neighborhood. “The improvised explosive devices were planted on two motorbikes, which went off with a big bang,” said police official Javed Odho.

The blasts, which damaged shops and cars, took place despite unusually tight security in the city, where at least 15,000 people attended a Sunni supremacist protest rally earlier in the day against the Rawalpindi sectarian episode. The demonstration was held in response to a countrywide call by the Ahl-e-Sunnat Wal Jamaat.

what has imran to say now about talking peace with his terrorist taliban brothers -is he with them or with the pakistani public. no wonder he lost the election and US not taking notice of what he says.imagine him being PM and close ties with terrorists – he might give the keys to the nuclear arsenal to the talibans for safe keeping!