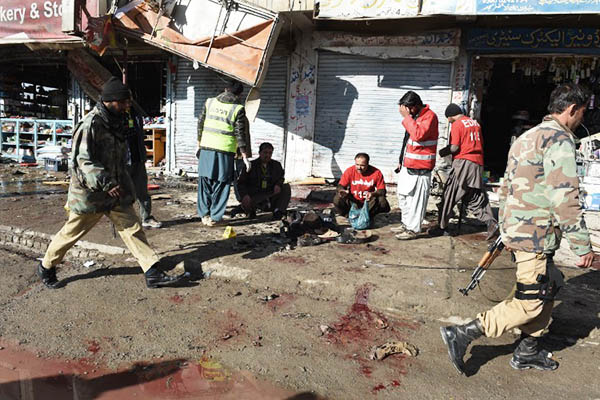 At least 15 people killed in blast, including 12 police and one paramilitary soldier.

A Tehreek-e-Taliban Pakistan suicide bomber blew himself up outside a polio vaccination center in Quetta on Wednesday, killing at least 15 people, mainly police, officials said.

The policemen had been gathering outside the center to accompany polio workers for the third day of a vaccination campaign, which are frequently targeted by militant attacks in Pakistan, in the violence-wracked province of Balochistan.

“There are 15 dead, including 12 police, one paramilitary, and two civilians,” said a local police official. Sarfaraz Bugti, Balochistan home minister added: “So far 15 people have been injured in the blast seven of whom are in critical condition.”

An AFP reporter at the site saw three burnt out vehicles that had been blown up in the explosion, while human remains lay strewn across the ground, walls, and electric poles along with items of clothing including the caps and shoes of policemen. Some officials had begun to gather evidence from the scene while others were collecting body parts to put in bags.

Eyewitness Shabir Ahmed, a 32-year-old police constable, said he had been deployed to protect a polio vaccination team that was due to leave for various neighborhoods of Quetta at 10:00 a.m.

“Suddenly there was a loud bang and I fell to the ground, I could not see anything, there was dust everywhere,” he said. “Then I heard people screaming and sirens of ambulances,” he continued, adding he had received shrapnel wounds to his stomach, hands, legs and feet.

Pakistan is one of only two countries where polio, a crippling childhood disease, remains endemic. Attempts to eradicate it have been badly hit by militant attacks on immunization teams that have claimed nearly 80 lives since December 2012.

The Tehreek-e-Taliban Pakistan claimed the attack on Facebook and in an email sent to local journalists. The Taliban have often claimed the polio vaccination drive is a front for espionage or a conspiracy to sterilize Muslims.

In 2014 the number of polio cases recorded in Pakistan soared to 306, the highest in 14 years. The most recent attack came in November last year, when unknown gunmen shot and killed the head of an immunization program in the Khyber-Pakhtunkhwa district of Swabi.

Islamist opposition to all forms of inoculation mounted after the CIA organized a fake vaccination drive to help track down Al Qaeda’s former leader Osama bin Laden in Abbottabad. The terror chief was killed during a U.S. special forces raid in 2011.