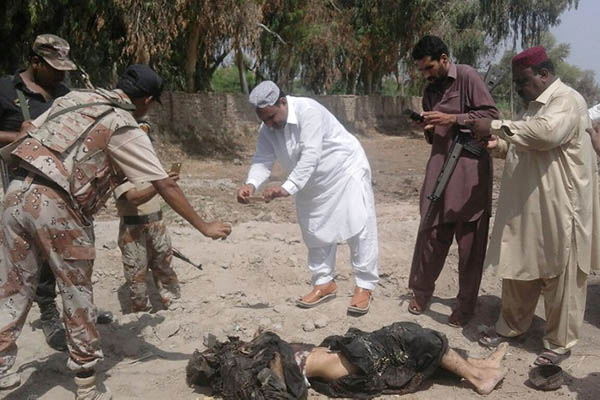 At least four injured in Sindh suicide attack, which came on same day as roadside bombing in Balochistan.

A suicide bomber injured four policemen, one critically, outside a Shia mosque in southern Pakistan in an attack claimed by the Pakistani Taliban as the country marked the beginning of the religious festival Eid al-Azha on Tuesday.

The incident occurred in Shikarpur in Sindh province, the same district where at least 61 were killed in a suicide attack on another Shia mosque in 2015.

Officials said two suicide bombers tried to enter the Khanpur Imambargah but were intercepted by police. “Four of our men are injured of whom one is critical,” said Umar Tufail, a senior local police officer. He added doctors were also trying to save the life of the other suspected bomber, who was injured when the first one blew himself up but failed to detonate himself.

“The attackers came as the worshippers were gathering to offer Eid prayers. Police were able to stop him at the gate outside the mosque,” A. D. Khawaja, chief of police for Sindh province said.

Worshippers overpowered the second would-be suicide bomber as the police were reeling from their injuries, he added.

A faction of the Pakistani Taliban, Jamaat-ul-Ahrar, claimed responsibility for the attack in a statement sent to media. Spokesman for the group Ehsanullah Ehsan said it was a part of an operation that would be spread to every area of the country.

Pakistan has been hit by frequent sectarian violence in recent years, most of it perpetrated by hardline Sunni Muslim groups against minority Shia Muslims, who make up around one in five of the population.

The January 2015 attack on Shias in Shikarpur, blamed on the Sunni militant Lashkar-e-Jhangvi group, led to a wave of nationwide protests.

In another incident on Tuesday, two policemen died and four were injured when their van was hit by a blast in Quetta city in Balochistan province. According to local police official Abdul Razaq, the van was targeted with a remote controlled bomb planted on the roadside.

“One policeman died on the spot while another succumbed to his injuries later at the government hospital in the city,” said another police official Abdullah Jan Afridi. He said the four policeman injured in the incident were stable.