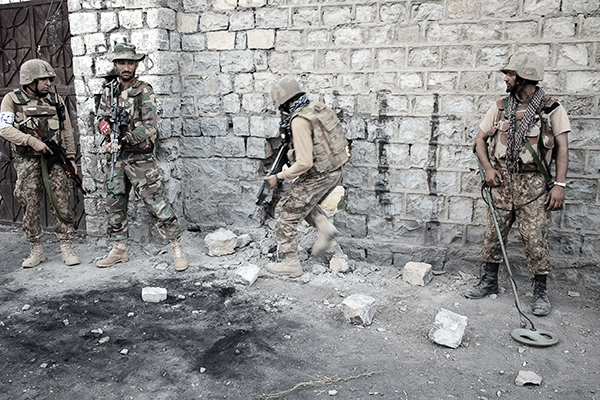 The media wing of the Tehreek-e-Taliban Pakistan’s Mohmand agency franchise has threatened the country’s news organizations over coverage of the military operation in North Waziristan.

On Monday, the Pakistani Taliban sent out an email addressed to “the heads and members of the organizations working for the rights of media members around the world,” including Reporters without Borders and the Committee to Protect Journalists.

The email, “The Global War of Ideologies and the Behavior of Media,” states:

“If we study the history of humankind, we come to know that the war between truth and falsehood is being fought continuously. Each group in the war considers their rival false and wrong, therefore, they always fight each other to the end.

“But in a civilized society, the people on the right path are considered those who are able to prove their truthfulness with firm and strong facts. It is clear that every belief or religion has its own principles, rules, and regulations about war affairs; [and] the people belonging to them take great care of these [principles and rules]. The people who consider themselves impartial and do not participate in war are provided special care.

“But the Pakistani media behaves toward us in this battle in such a way that is even against its own principles. The media thinks it has a legitimate right to … spread false and baseless news; to make propaganda against us on behalf of our enemies and play the role of war propagandists; to call mujahideen bad, disgusting and absurd names; to blaspheme [against] Islamic traditions; to not listen to our views; to get the results of its own choice by changing our views, messages and statements; to represent Islamic teachings in wrong and misleading ways; and to act as a judge to us on every matter.

“We have always been tolerating its unjust harsh criticism and false allegations but right now, during the Waziristan operation, its shameless brazen character has crossed its limit and got extremely unbearable. As a result of its irresponsible, thoughtless and criminal behavior, there is rage among the mujahideen that is in no way auspicious for [media] members. We have tolerated from 2000 to 2014 such an unbearable behavior long enough.

“This message is aimed at making you aware that if we get engaged in attacking them then no crying and sobbing will be heard and we think accomplishing our legitimate and decent mission without attending to criticism of any criticizer is our appropriate right. We realize our responsibilities properly.

“We want to remind you that we always remember our enemies and before we bolster attempts to get our rights back and the Pakistani media loses its chance to repent, the media needs to purge itself from its dishonest intentions, reprehensible shameless character, and prevailing satanic and cruel activities.

In his response, Bob Dietz, coordinator of CPJ’s Asia Program, states that, “Pakistan’s military has made independent media coverage of the fighting [in North Waziristan] extremely difficult, though not impossible. Because of the restricted coverage, the TTP is accusing the Pakistani media of betraying its journalistic mission by behaving [biased]. My interpretation is that the TTP is losing the media battle to present its side of the conflict, and is not pleased with the situation. Given that the fighting doesn’t look to end any time soon, and the government is dominating the news flow from the battlefield, the TTP is threatening to take its frustrations out on Pakistani journalists in an attempt to reverse the information war it is losing.”

Dietz continues: “The TTP has always been media savvy, if not always media friendly. Their spokesmen are readily available and return calls quickly, and the groups maintain websites and social media accounts for both publicizing their victory claims and recruiting … For their part, Pakistani journalists have long been under pressure from every group with a political or criminal agenda in the country—the military and intelligence agencies, the many militant groups (including the TTP), political parties, local strongmen, and criminal thugs. We have written about how journalists are under constant threat no matter what their political slant, and how they can be harassed, abducted, beaten, and killed with near-perfect impunity … Just as journalists in Pakistan will keep doing their jobs, CPJ will keep on publicizing the attacks on them from any quarter, drawing attention to the increasingly unstable situation in which they find themselves.”

The CPJ’s response has not pleased the Pakistani Taliban. It says Dietz “did not take our message in a serious way and [instead] appreciated journalists for their irresponsible principles and role in the war which shows that he is also a regular rival in this war.” The militants further say that if the media coverage continues as it is, it will provoke a “tough reaction” from them. “Until now, we have considered journalists impartial. But if they themselves want to become our rivals, we will have to adopt the same behavior we have with our enemies, the Army and government of Pakistan.”

no solution no End