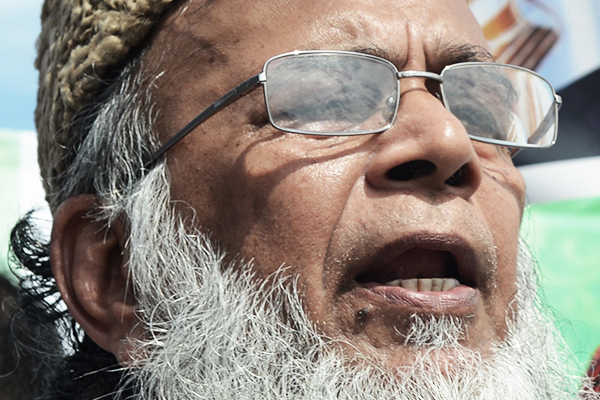 The Pakistani Taliban, in a video posted on Vimeo four days ago, has leaped to the defense of Syed Munawar Hasan, chief of the politico-religious Jamaat-e-Islami party who faced widespread condemnation for declaring Hakimullah Mehsud a “martyr.”

Mehsud, chief of the Pakistani Taliban, was killed in a U.S. drone strike in federally-administered North Waziristan tribal agency on Nov. 1. Hasan’s beatification of the brutal mass murderer shocked many, and earned him an unprecedented rebuke from Pakistan’s Army.

Shahidullah Shahid, the lead spokesman for the Pakistani Taliban, says in the video that Pakistan’s media must refrain from attacking Hasan, whose controversial statement was, he claims, “in line with the teachings of Islam.” Shahid also warns the media not to deny Mehsud the martyrdom honorific.

Believing that he’s supporting the point, Shahid cites cricket as an example: “To continuously claim that Hasan is wrong is akin to someone telling the media that praising a player like [India’s] Sachin Tendulkar, who might be great, is against nationalism.” He adds: “It would be like saying that no matter that [Pakistan captain] Misbah-ul-Haq is a substandard player, but the Pakistani media should praise him because he is a Pakistani.”

The spokes person is a clown notwithstanding, the scribe has nevertheless misunderstood the Tendulkar/Misbah/nationalism analogy.

The spokes person said that people who deny Tendulkar’s greatness for being Indian are “wrong” and just like the people who oppose TTP.

I hope to see you publish a correction, like any well-reputed news organization. Thank you.

What? i still don’t get what he is saying

See the clown in his own words: https://vimeo.com/80132898 But what he said regarding Tendulkar is actually quite reasonable. He said, if you refuse to praise Tendulkar just because he is Indian, your prejudice does not change the reality that Tendulkar is in fact a great player; similarly, if you praise Misbah just because he is Pakistani, your prejudice does not turn him into a great player.

What is mind boggling is how he believes this analogy redeems the killed Taliban commander.

IK cannot keep his owns kids him and he rather prefers them to raised by a non Muslim mother. Imran khan is the biggest hypocrite of all times and he is on his way becoming Gen Zia 2.0.

He deserves to be Droned.!!