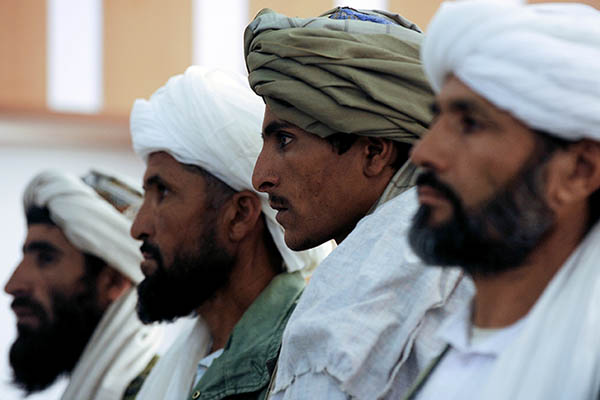 Leaders of homegrown faction claim some individuals have left to fight in Syria.

Pakistani Taliban commanders on Tuesday rejected suggestions they were sending fighters to Syria, saying some have gone there independently but the movement’s focus remained in Pakistan.

They said some militants, mainly Arabs and Central Asians, had gone to fight the forces of President Bashar al-Assad, but a senior Taliban leader dismissed reports of them setting up camps in Syria.

The lawless tribal areas of northwest Pakistan along the Afghan border have long been magnets for militants from across the Muslim world eager to fight U.S.-led NATO forces in Afghanistan. But since the uprising against Assad began in March 2011, foreign jihadists have flocked to Syria, where disparate rebel groups are seeking his downfall.

Some media reports in recent days have claimed scores or even hundreds of Pakistani Taliban are among them and that they have set up camps in Syria. A senior commander who sits on the shura or ruling council of the Tehreek-e-Taliban Pakistan said there was no tactical shift and no decision had been made to send forces to Syria. “There is no reality in these reports, we have far better targets in the region, NATO troops headed by the Americans are present in Afghanistan,” he said on condition of anonymity. “We are already in a war with Pakistani troops. We support the mujahideen’s struggle in Syria but in our opinion, we have a lot more to do here in Pakistan and Afghanistan.”

The Pakistani Taliban is an umbrella group for numerous factions trying to bring down the Pakistani state and impose the Shariah. It has ties to the Afghan Taliban and Al Qaeda.

“The great evil [America] is here in Afghanistan, troops from 30 kafir [non-believer] countries are attacking innocent people in Afghanistan, so Bashar al-Assad is not that important for us,” the Taliban commander said. “Obama is the big evil, Americans are a much bigger evil for us. The Taliban shura has never discussed sending mujahideen to Syria.”

Another mid-ranking Taliban commander in Miranshah, the main town of the North Waziristan tribal district that is a hotbed of Taliban and Al Qaeda activity, said some fighters had gone to Syria “in a personal capacity.” A third senior Taliban cadre said those who had gone were mostly Arabs, Uzbeks, and Chechens.

More than 100,000 people have been killed since the uprising against Assad erupted, according to the Syrian Observatory for Human Rights.

Analyst Rahimullah Yusufzai dismissed claims of the Taliban setting up camps in Syria as “a publicity campaign” by some of the militants. “But we cannot deny the fact that they are quite ambitious and want to send a clear message to the world that they are still very strong and have strong linkages with other local and international groups,” he said.

Ismail, an Arab fighter from Al Qaeda in northwest Pakistan, said that he planned to join the fight against Assad. “I am going to Syria in the next few days, my family will stay here,” he said. “Our mujahideen are going not only to Syria but also to Lebanon, Egypt, and other Arab countries.”

Saifullah Khan Mahsud, the executive director of the FATA Research Center and an expert on Pakistan’s tribal zone, said fighters had been going to Syria from Pakistan for at least a month and a half. “Most of them are foreigners but Pakistanis have also joined them,” he said.