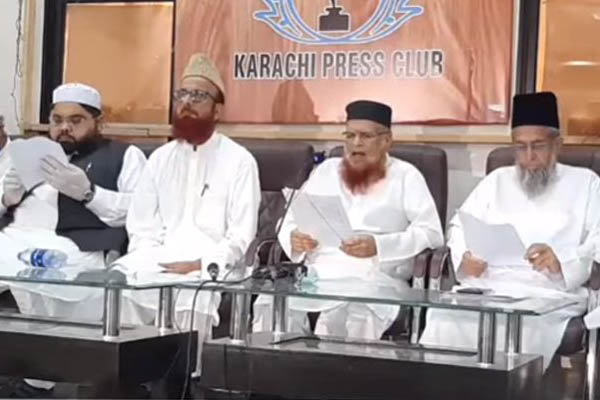 Ulema and religious scholars from across Pakistan on Tuesday announced that mosques would immediately reopen for Friday and five-daily mass prayers, and would implement precautionary measures advised by the government to curb the spread of the coronavirus.

Addressing a press conference in Karachi, Mufti Taqi Usmani, former judge of the Federal Shariat Court, said a meeting of representatives of religio-political parties and ulema had decided that prayers would now resume at mosques, as he listed the precautionary measures mosques are claiming they’ll implement.

Proper distancing between individuals and rows during congregational prayers would be ensured, said Usmani, as he urged people to also return to their homes as soon as prayers were over. He said the elderly should also pray at homes.

Usmani also urged the government to not arrest people praying in mosques. “All those who have been arrested [thus far] should be released,” he said.

Ruet-e-Hilal Committee Chairman Mufti Muneebur Rehman said the lockdown did not apply to mosques. He said ulema would make arrangements for Friday prayers and for tarawih prayers in Ramzan.

The announcement to defy government restrictions on mosques comes as Prime Minister Imran Khan has announced exemptions for several industries, including construction, as well as businesses deemed ‘low risk’ for the spread of COVID-19.

Earlier this month, all provincial authorities had issued orders directing mosques to restrict all congregational prayers to five people or less. Despite these instructions, several mosques across the country flouted the ban, resulting in clashes between police and clerics.

In a statement issued after the press conference, the ulema described the government’s restrictions as “impractical,” and said congregational prayers were a “necessity” at this time. However, it said, precautionary measures could be implemented to limit the spread.

According to the statement, mosques would remove carpets, disinfect the floors after every prayer, and install hand sanitizers at entry and exit points. Congregants would be encouraged to perform their ablutions at home, wear masks and not linger after prayers, it said, adding Friday sermons would also be used to disseminate information about coronavirus.

On Monday, Religious Affairs Minister Noorul Haq Qadri had said the entire country would adopt a uniform policy regarding Ramzan and mosques in light of the coronavirus pandemic. He had said he would meet with religious leaders for policymaking consultations. Similarly, the prime minister today said he would meet religious scholars and announce a policy for Ramzan before the holy month starts next week.

Thus far, Pakistan has reported 5,837 confirmed cases of the novel coronavirus, with 100 deaths and 1,378 full recoveries. More than a fifth of all patients have thus far been traced back to a gathering of the Tablighi Jamaat that was held on the outskirts of Lahore last month despite calls from the government for clerics to postpone it.

Pakistan is rapidly emerging as an outlier in the Muslim world, remaining one of the few countries where mosques have not been shut down to reduce the spread of the novel coronavirus. The government of Saudi Arabia has even halted prayers at Mecca, while Jordan, Turkey, Iran have all also closed mosques.