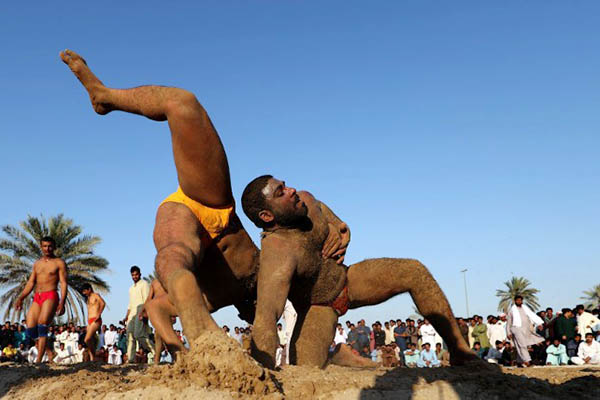 Weekly event helps workers blow off steam, is encouraged by authorities as healthy form of entertainment

Every Friday evening in Dubai’s bustling Deira district, a sandy lot is transformed into the ring of champions. It is kushti wrestling night and Kala Pehlwan is ready to fight.

As the sun sinks below towering palm trees, dozens of men—many in tunics, others in T-shirts—begin to form a perfect circle. Most are Pakistani or Indian, from the cross-border region of Punjab, where kushti is a beloved pastime. They are also a pillar of the United Arab Emirates’ workforce.

The wrestlers unabashedly strip down to their underwear, donning yellow, red, or even floral-patterned loincloths. “Kala Pehlwan, son, come to the ring! Suhail, son, come to the ring,” cries out 50-year-old Mohammed Iqbal—a Dubai kushti fixture. Glaring, the opponents swipe one another’s bodies with sand—a reciprocal move to counter sweat.

The day’s matches are quick—sometimes under a minute—and hard fought.

A foot is trapped between a rival’s legs, a fighter flips over his opponent’s shoulders to escape his grip. One pins his match down on his stomach and throws sand in his face before getting restrained by the referees. Spectators dart into the ring to film fights. Others watch in rapture, breaking out in cheers at decisive moments in the match.

The winner is declared when a fighter manages to pin his opponent to the ground on his back. If the fight starts going over 20 minutes, the referees declare a tie.

On this evening, Kala Pehlwan finds himself overpowered—and faced with a challenge. “Find me a fighter that can beat me,” his opponent taunts.

Kala Pehlwan, 26, huddled with friends and came up with a plan. They would find a challenger—not from Dubai, but from their hometown of Muzaffargarh in Pakistan’s Punjab province. Within days, they had gathered the money, throwing in 50-100 Dirhams each to pay for a plane ticket.

Row upon row of ice-topped stalls are laden with fresh fish from Oman, Sri Lanka and beyond—a testament to the shipping hub that is Dubai. The stalls bear the names of Emirati owners, but South Asians are the face of the market.

“We have connections from Pakistan at the fish market,” says Kala Pehlwan. This is where he learned about the kushti matches when he arrived in Dubai six years ago. The brawny fighter enters the delivery area, crossing paths with his mentor, Mohammed Iqbal, who is pushing a cart of fish.

“When I enter the market everyone is excited. They recognize me and know my name. And if there is any problem, they come to help me because I’m famous,” Kala Pehlwan grins. That evening, Mohammed Shahzad—the challenger from Muzaffargarh—tags along.

Dressed in a crisp, blue tunic, Shahzad, 22, says he didn’t hesitate when he received Kala Pehlwan’s call. “The other fighter beat my friend and challenged him to find someone who can knock him out… so I came to Dubai,” he grinned.

Kala Pehlwan says kushti is a way of life back in Muzaffargarh. “In our town, it’s a tradition to learn wrestling. Everybody grows up on kushti. They do not have bad habits like cigarettes or drugs. Everyone is trying to be fit for a fight.”

Kala Pehlwan—whose real name is Mohammed Arsalan—took his nom de guerre from a hometown legend who shares his fighting style. He says a proper diet, coach and training are key to success. Eating right is his biggest challenge in an expensive metropolis.

Here, the fish market has some benefits. “Fish is my favorite dish. It is the healthiest food because in Dubai, most things are coming in frozen form but fish is fresh. Every other day I am eating a fish from the market. We are getting free fish from our employer at the end of the day,” Kala Pehlwan says, returning to stack crates.

For Kala Pehlwan and many of his friends, Dubai is a temporary stage in life—a place to save cash before returning home. They work hard and sleep in shifts.

AFP obtained permission to film at the men’s residence but was unable to because it would have disrupted the group’s sleeping patterns. “We all have our jobs here. Some are porters, some work in the fish market,” Iqbal says ahead of a Friday match. But kushti, he adds, “is our tradition. It’s where we come to de-stress.”

Iqbal wrestled for more than two decades in Dubai before passing the torch to the next generation, whom he takes the time to train each evening before work. “It’s not hard to get a space for these fights because in Dubai they always want entertainment and encourage us. The [authorities] say arranging fights like this is better than fighting in anger where you live or at your workplace,” said Iqbal.

Kala Pehlwan says he can earn 500-600 Dirhams ($135-$165) on a good night—the money collected in a plastic bag by the referee and champion—but kushti is not about money. “We can’t enjoy life, we can’t have a good time if we don’t have wrestling in Dubai,” he said. When Friday night comes around again, it’s the visiting challenger, Shahzad, who wins.