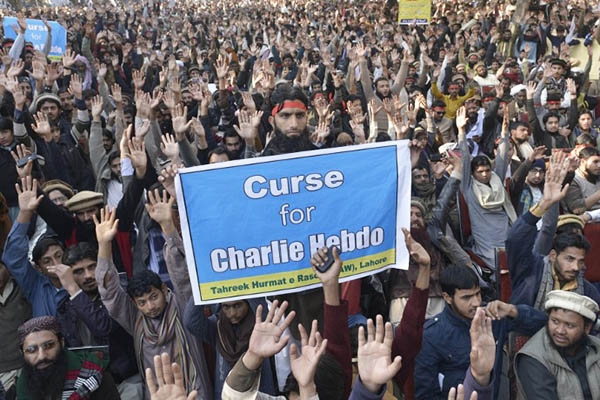 Christians in Peshawar and Karachi join their Muslim countrymen in condemning the satirical magazine.

Protests against French satirical magazine Charlie Hebdo were held across Pakistan on Sunday as thousands of people in almost all major cities chanted slogans against its printing of cartoons of Islam’s Prophet.

Workers from both religious and secular political parties gathered in Lahore, Karachi, Islamabad, Quetta, Peshawar, Multan and many other cities and burnt effigies of French president Francois Hollande and of cartoonists at the magazine along with French flags. More than 2,000 people marched in Karachi, where the Jamaat-e-Islami party organized a rally at the mausoleum of Mohammad Ali Jinnah, founding father of the nation.

A group of Christian pastors also took part to show solidarity with their Muslim countrymen.

Elsewhere in Karachi, dozens of members of the Pakistan Tehreek-e-Insaf party founded by Imran Khan rallied against the magazine and the French government. A delegation visited the residence of the French consul-general to submit a resolution demanding Paris ban the magazine “for spreading religious hatred in the world,” a party spokesman said.

In Lahore around 6,000 people attended a rally by Islamic groups, including the hardline Jamaat-ud-Dawah. Speakers urged Pakistan to sever relations with France.

In Quetta, protesters trampled the French flag before burning it, along with pictures and effigies of the French president. In Peshawar, more than 100 Christians took part in a rally from a local church and chanted slogans against the magazine. “Death to Charlie Hebdo, death to the blasphemer of Prophet Mohammed,” they shouted. They also burnt the French flag.

Around 200 people in Islamabad gathered outside the national press club and burnt effigies of the cartoonists.

In Multan, protesters shouted “We are not Charlie, we are Kouachi”—a reference to the “Je Suis Charlie” rallying cry supporting the victims, and to brothers Cherif and Said Kouachi who killed 12 people at the magazine.

On Friday at least three people were injured—including an AFP photographer who was shot—in clashes between anti-Charlie Hebdo protesters and police outside the French consulate in Karachi. The protest by the student wing of the Jamaat-e-Islami religious party was one of several staged across Pakistan by Islamist groups after Friday prayers.

Pakistan has a history of violent protests following the publication in the West of material considered blasphemous. In 2012, 21 people were killed and more than 200 wounded, mainly in clashes with police, following the publication of previous cartoons by Charlie Hebdo and the broadcast of a U.S.-made anti-Islam film. Protests against cartoons by a Danish paper left five dead in 2006.