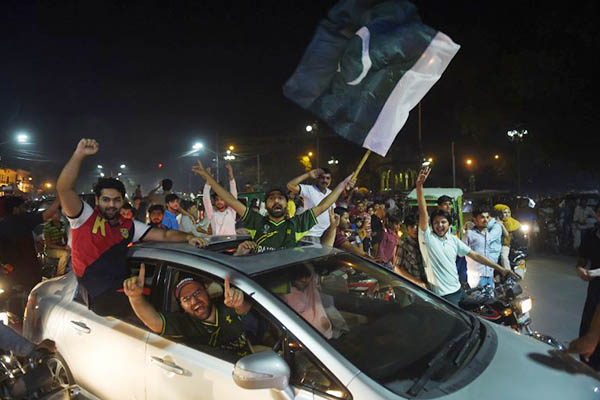 The streets of Pakistan’s cities lit up with celebrations on Sunday night after the country’s cricket team defied the odds to thrash rival India in the Champions Trophy final in London.

The upset, which saw Pakistan win by a record margin in the final of a global event, came after they had been on the receiving end of a hammering by India in the tournament opener and were written off by fans and pundits alike. It was watched by hundreds of millions of fans globally, possibly a billion, and brought normal life to a standstill across much of the subcontinent.

But when bowler of the tournament Hasan Ali picked up the final wicket of Jasprit Bumrah to put the Indian tail out of its misery for just 158 runs—180 shy of Pakistan’s mammoth 338, celebratory gunfire erupted in neighborhoods up and down the country.

“Wow wow wow unbelievable performance by team green. It feels like deja’vu after winning the 1992 WCup. I am over the moon #PakistanZinabadad,” tweeted ex fast-bowler Wasim Akram, who also compared fast-bowler Mohammad Amir’s master class in high-swing bowling to his own during his 1990s heyday.

People poured into bazaars and markets in Karachi, Lahore and Islamabad to celebrate the win by blaring patriotic pop songs, as youths performed wheelies on motorcycles and waved flags as they dangled out of cars.

The win came as mainly Muslim Pakistan prepares for Eid after the fasting month of Ramzan—though for many fans, the festival had already arrived. “I’m so happy. Eid came early for Pakistanis this year!” tweeted one fan.

A matchup between the two sides is seen as the world’s premier cricket contest, despite the fact in recent years the outcome has generally been one-sided in India’s favor—particularly in knockout tournaments. That jinx, however, now stands emphatically broken, with the magnitude of the victory surprising even to diehard fans more used to a team that conjures defeats from favorable positions.

Amid the general exultation, praise was reserved for India skipper Virat Kohli who showed grace in defeat during the post-match presser. “Virat Kohli is truly a credit to his team and nation, a generous and honest sporting spirit,” wrote radio host Fasi Zaka.