Pakistan on Tuesday morning reported 1,841 new infections of the novel coronavirus in the preceding 24 hours, against 567 new recoveries, raising the total number of active cases by 1,238 to 30,538. The country also reported 36 new deaths, raising to 939 the fatalities caused by the virus thus far.

The Supreme Court of Pakistan, while hearing suo motu proceedings into the government’s coronavirus response, issued orders for shopping malls to reopen across the country—a move that had been resisted by Balochistan and Khyber-Pakhtunkhwa—as well as granting permission to shops to stay open 7 days a week. The government, in a bid to curb the spread of COVID-19, had implemented a 4-day workweek, with shops shuttered for business from Friday through Sunday.

The move has been met with growing concern among healthcare professionals who have warned that if the number of crowds seen in markets last week continue, the country’s medical infrastructure risks being burdened beyond capacity.

In a similar move, Federal Railways Minister Sheikh Rasheed announced that train services would resume from Wednesday, with 30 trains allowed to operate before Eid, when special trains will be ferrying passengers back to their homes. Unlike the restoration of road-based public transport, which has been issued with guidelines restricting the entry of the elderly and reduced fares, the train services have no bar on entry based on age or infirmity and has sustained its pre-coronavirus fares.

Despite having officially restored public transport services, the country’s most populous province was unable to mobilize private routes on Monday, as operators said they could not resume service under the standard operating procedures issued by the government. The All Pakistan Transport Owners Association said that they would rather not operate their vehicles than have to offer reduced occupancy and reduced fares.

Provincial capital Lahore has alone recorded 7,671 cases of coronavirus, according to the Punjab Disaster Management Authority, along with 102 deaths and 1,635 recoveries. The city currently has 5,934 active cases of the coronavirus.

Provincial authorities have been forced to reopen shopping malls following the Supreme Court’s orders, despite maintaining SOPs have yet to be fully determined. Meanwhile, Transport Minister Syed Awais Shah said that the province would not let any trains enter its limits if SOPs were not being followed, potentially creating friction between the federal and provincial governments. Railways Minister Sheikh Rasheed Ahmed had on Monday claimed that train services belong to the nation, and he would not be bound by restrictions from a single province.

The total number of confirmed COVID-19 cases in Sindh on Tuesday morning rose to 17,241. Additionally, the province raised its casualties to 280, while its recoveries rose to 4,489. Overall, the province now has 12,472 active cases of the novel coronavirus, 10,380 of them from Karachi. 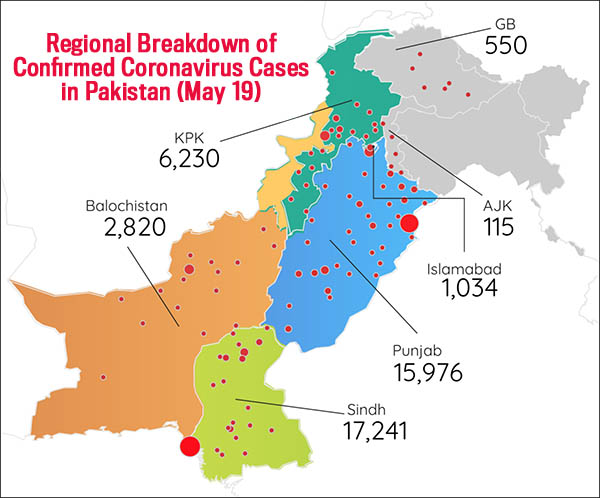 The province recorded 16 new deaths from the novel coronavirus in the 24 hours preceding Tuesday morning, bringing to 334 the total number of people dead.

Authorities also said the province now has 6,230 confirmed cases, with 1,944 recoveries. There are currently 3,952 active cases in the province.

The province has thus far reported 2,820 confirmed cases of the novel coronavirus, with 38 deaths and 524 recoveries. It currently has 2,258 active cases of COVID-19.

Provincial spokesman Liaquat Shahwani on Monday said authorities had yet to decide on reopening public transport as easing restrictions for traders had resulted in a massive spike in infections due to numerous violations to the SOPs issued by the government. He said no decision would be taken if it risked overwhelming the province’s healthcare infrastructure.

Islamabad on Tuesday raised its confirmed COVID-19 infections to 1,034, with 9 deaths and 113 recoveries. Presently, the Islamabad Capital Territory has 912 active cases of the novel coronavirus.

In Gilgit-Baltistan, cases of the novel coronavirus rose to 550, with no new deaths or recoveries. Overall, it now has 4 deaths and 368 recoveries, leaving 178 active cases.

In Pakistan-administered Kashmir, the total number of confirmed cases has increased to 115. The region has recorded no new deaths or recoveries in the past 24 hours, leaving it with 1 death and 77 recoveries. There are currently 37 active cases of the virus in the disputed region.

Globally, the virus has now infected more than 4,894,222 people, with over 320,180 reported deaths. Governments across the world have halted flights, locked down towns and cities and urged people to stay at home, but there are signs of easements to help shuttered economies recover. Overall, around 1,908,065 patients of the 4.8 million+ infected have recovered thus far.