Pakistan on Friday recorded another 136 deaths due to COVID-19, as the National Command and Operation Center (NCOC) claimed its “smart lockdown” was already paying off in terms of fewer overall infections.

The NCOC statement came during a meeting to review the prevailing situation in the country. It alleged the “selective lockdown” imposed over the weekend had already started to result in fewer infections, which is highly unlikely as the 2-week incubation period of the novel coronavirus means no measure can evoke a response before at least a week has passed.

In the same period, 2,168 patients were declared COVID-free, raising recoveries to 61,383. There are currently 100,450 active cases of COVID-19 in the country, with the NCOC reporting 3,515 of them are in critical condition.

Meanwhile, researchers in China have found that people who catch COVID-19 but show only mild or moderate symptoms are likely to have significantly lower levels of immunity against future infections from the virus. Published in Nature Medicine, the findings revealed that after eight weeks of convalescence, antibody presence had fallen in 81.1 percent of asymptomatic patients, compared with 62.2 percent of symptomatic patients.

Chief Minister Usman Buzdar on Thursday issued a notification directing the health minister and the Secondary Healthcare and Medical Education department to fix a price for coronavirus testing in private labs of the province so prevent from different labs from charging varying rates. “The government would not let private labs loot people,” he added.

On Friday, authorities reported 63 new deaths due to COVID-19, raising total fatalities to 1,265. The province also reported 1,540 new infections, raising confirmed cases to 61,678, against 17,892 recoveries. There are now 42,521 active cases of the virus in Punjab province.

“Today is a sad and deplorable day for us when we have lost 48 lives due to COVID-19 in past 24 hours. Most of these deaths occurred in Karachi,” Chief Minister Murad Ali Shah said on Thursday while providing his daily situation report. “It has hurt me so much because the number of deaths is the highest in a day so far,” he added.

The provincial government on Thursday announced it was increasing the capacity of hospitals to cope with the expected surge in coronavirus cases in the next 6 weeks. In a press conference, Adviser to the C.M. Ajmal Wazir said 176 beds had been provided for COVID-19 patients in major hospitals, adding in the past 10 days alone, 32 ICU and 144 high dependency unit beds had been added. 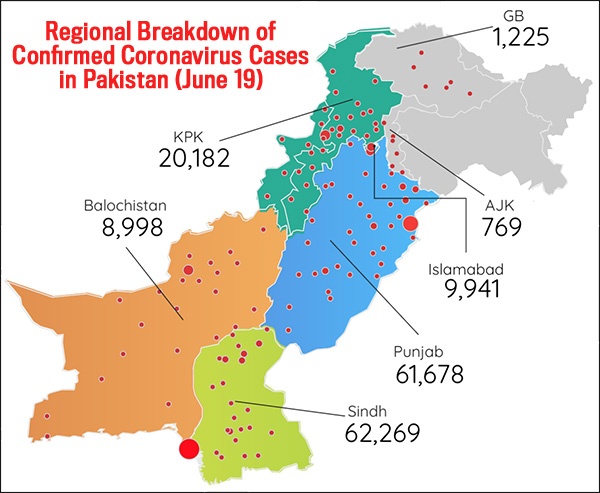 Provincial spokesman Liaquat Shahwani on Thursday said the government has increased its testing capacity from 80 to 1,200/day in the four months since the pandemic emerged in Pakistan. Summarizing the first 100 days of the pandemic, he said the province had imposed a lockdown on March 17, adding it was unfortunate that infections had started to increase after movement restrictions were eased. “Most people resisted getting tested [earlier] because of the fear of being stigmatized and having to live in a quarantine center, but once the government allowed patients with mild symptoms to remain at home, more residents came forward to get tested,” he added.

Confirmed cases of the novel coronavirus in the province on Friday rose by 204 to 8,998, with 6 new fatalities raising the total death toll to 99. Overall, 3,140 patients have recovered from the virus, leaving 5,759 active cases of COVID-19.

Islamabad on Friday raised its confirmed coronavirus cases to 9,941, with 95 fatalities. Overall there have been 2,770 recoveries, leaving 7,076 active cases of COVID-19.

Gilgit-Baltistan Agriculture Minister Janbaz Khan on Thursday died due to the coronavirus. He is the fourth lawmaker to succumb to the virus since the pandemic broke out in Pakistan. Confirmed cases of the novel coronavirus in the region rose on Friday to 1,225. Overall, the region has thus far reported 18 deaths and 794 recoveries, leaving 413 active cases.

In Pakistan-administered Kashmir, confirmed cases increased to 769. In the past 24 hours, there have been no new deaths and 10 recoveries, resulting in death toll of 15, and recoveries of 312. There are now 442 active cases of the coronavirus in the region.

Globally, the virus has now infected more than 8,578,280 people, with over 456,285 reported deaths. Governments across the world have halted flights, locked down towns and cities and urged people to stay at home, but there are signs of easements in nations that have reined in the virus’ spread to help shuttered economies recover. Overall, around 4,530,265 patients of the 8.5 million+ infected have recovered thus far.