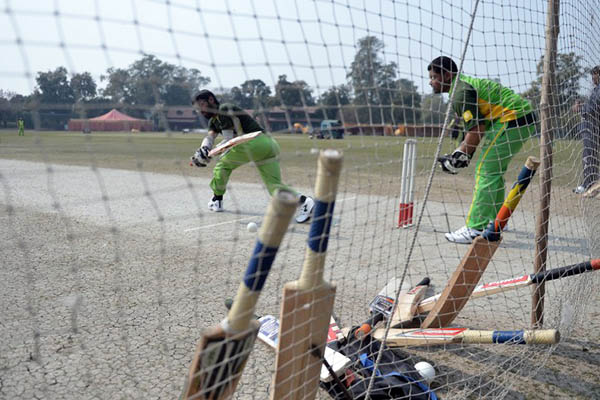 Lacking government support, blind people in Pakistan are carving out a space for themselves in international sport.

Pakistan’s blind cricket captain Zeeshan Abbasi was once a shy and awkward child who relied on his family and friends to get by in a country where disability is a major stigma.

Growing up in the mountainous northern Ayubia district, his earliest memories are of clutching his mother’s hand as they climbed a winding path to a school where he was never fully accepted. But having recently led his team to the final of the World Cup and triumph in a series over India, he credits cricket with turning his life around. “If I didn’t play cricket, I would not have enjoyed this status as a national celebrity. My blind friends are unable to do anything and have become a burden for their families,” the 30-year-old said.

Pakistan is home to almost two million blind people, according to the Fred Hollows Foundation, with more than half afflicted due to preventable diseases like cataracts. They are often forced to deal with societal taboos surrounding disability and have little in the way of government facilities to aid them in public spaces. Neglected by their families, their education and personality development suffers.

Abbasi recalls how as a child he was punished for not being able to keep up at his first school. “My teachers did not know how to teach me,” he says.

Realizing the youngster’s difficulties, his uncle arranged his admission in a school for blind children in the city of Rawalpindi, where he was introduced to cricket. “I started playing at the age of 10. Later, myself and a group of friends founded the first ever Islamabad blind cricket club. We used to spend our pocket money to buy the cricket gear,” he recalls. Even then Abbasi initially faced opposition by his family.

“I was beaten by my parents several times for playing cricket because they thought I was wasting my time and I should study for a better future,” he said. “Once while practicing with normal cricketers, the ball struck my left eye and I lost the little sight I had,” he said, adding his right arm was fractured six times while playing. Abbasi persevered, finally making his debut as an 18-year-old against South Africa in 2000 and later becoming captain in 2011.

For newcomers to the sport, understanding how players without sight can hold a competitive game can be confusing. A blind cricket team comprises a maximum of four partially sighted players, three partially blind players, and a minimum of four totally blind players. A white ball made of hard plastic and filled with small ball bearings is used so that the batsman can hear it coming.

Contrary to normal cricket, in the blind format bowlers deliver a ball under the arm and the batsman sweeps it after judging its direction by hearing the ball bearings. The wicketkeeper directs fielders about the direction of the ball and he runs behind it to catch it.

Abbasi’s 2000 debut came as Pakistan was beginning to establish itself as the format’s foremost team. With two World Cup victories under their belts they also regularly play India, in contrast to their able-bodied counterparts whose ties are hobbled by ongoing political tensions.

Members of a blind team form a particularly close bond as they are forced to fully rely on each other. “We have to take along every player in blind cricket. This is how blind cricket works. So we have to trust each other in the game,” Abbasi said as his team worked out in a practice session in Lahore.

Pakistan coach Abdul Razzaq said the blind cricketers are an extremely fit bunch. “Blind players have a good mobility and run behind the ball. The player chasing a ball has no fear of colliding with others because he knows there is nothing between him and the ball up to 45-50 yards,” he said.

Tahir Ali, project manager for the Pakistan Foundation Fighting Blindness, said the government has a long way to go to provide a basic quality of life for people of all disabilities, particularly the blind, among whom unemployment is especially high. “But these blind children are always very talented. They are very strong in cricket … the government should support them, arrange sponsorship and regular scholarships for them,” he said.

A victory over the visiting Indian side in the three Twenty20 and as many ODI matches series meanwhile has lifted the team to new levels of confidence.

For Abbasi, the game has also brought respect inside the family. “I travel abroad to play cricket and help my family through the money I earn from the game. My father and uncle have died and now my family realizes that the game is paying me back. I travel in cars comfortably now, otherwise walking on roads with open mainholes and boarding buses is a difficult task for a blind person in Pakistan. Nobody understands the meaning of a white cane over here,” Abbasi said with a smile.