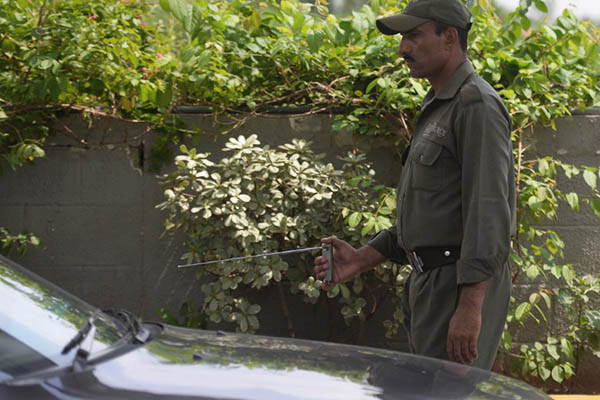 With radio-like antennae meant to swivel and point at vehicles carrying bombs, “magic wand” explosive detectors proliferated throughout conflict zones in the 2000s until they were exposed as a global scam. But in an astonishing security threat, more than 15,000 of a new variant of the handheld device have been made in Pakistan to guard high-value facilities such as airports and government installations, despite officials conceding they are effectively useless.

Many creators of the original devices are serving long prison sentences for fraud, including British businessman James McCormick. His ADE-651 became a mainstay of security forces in Iraq, where $85 million was spent on them, before they were officially banned last month. “It serves a deterrence value only—it’s good for police and security personnel to have something in their hands,” said a senior interior ministry official, who asked to remain anonymous.

Pressed on whether Taliban and Al Qaeda insurgents—who have been waging an insurgency that has that claimed more than 60,000 lives in Pakistan since 2004—may by now be wise to the deception, he conceded: “Yes, they are savvy and they probably are aware by now.”

His comments were backed by two more senior members of government, though neither was prepared to go formally on the record.

Official silence over the matter may be linked to the enormous sums of money involved in the business, observers say, while many bureaucrats fear for their jobs if they speak out. “Powerful people make money through these scams and you cannot offend powerful people, even if it means endangering lives,” said one former official at the interior ministry.

Pakistan initially imported foreign detector devices such as the ADE-651 and the German made Sniffex, according to a government source, but in 2009 Pakistan’s Airport Security Force (ASF) took over making and selling the wands. More than 15,000 units have been sold within the country at a cost of Rs. 70,000, according to an official, amounting to total revenue of more than $10 million.

The ASF, which declined multiple requests for comment, is technically a civilian institution but is staffed by many serving senior officers deputed from the military, which wields considerable influence over the country’s defense and foreign policy. The wands, named ‘Khoji’ (finder), are used by security personnel to protect airports and government installations, and have also been widely sold to the private sector and deployed at malls, hotels and fast-food chains.

The device claims an accuracy level of 90 percent, according to a copy of its user manual obtained by AFP, but uses the principles of radiesthesia, or dowsing, which experts consider junk science. “Khoji is the first device of its kind that can detect explosives from distances of up to 100 meters, even when the explosive is hidden behind walls or metal barriers such as buildings or vehicles,” the manual boasts. “It detects the interference by between the magnetic field of the earth, the explosive, the device itself and the human body, which allows the device to penetrate and locate even small amounts of explosive through concrete, soil, and metal barriers.”

But Andrea Sella, a professor of chemistry at the University College London, dismissed the claims as “laughable.”

“There is no physical basis for the operation of those devices,” he said. “It’s pure snake oil, sold to desperate people who use them because something, even if useless, is better than nothing. There is no ‘magnetic’ signal that you might be able to pick up. The idea that you could do so through metal, especially steel in a car, is laughable.” His comments were backed by Pervez Hoodbhoy, a leading Pakistani physicist who trained at MIT in the U.S.

“It’s a fraud. There’s no way that explosives can be detected by electromagnetic means,” he said.

Leading scientists are currently developing legitimate explosives-detectors based on sensors that “sniff” out explosive compounds such as triacetone triperoxide, but the work remains in its infancy. A Western security consultant in Afghanistan told AFP: “The only device that can currently detect such explosives is a dog.”

They are savvy and they probably are aware by now.