Confirmed cases of the novel coronavirus in Pakistan rose to 45,898 on Wednesday morning as the country reported 1,932 new infections in the preceding 24 hours, against 612 new recoveries, raising the total number of active cases by 1,274 to 31,812. The country also reported 46 new deaths, raising to 985 the fatalities caused by the virus thus far.

Special Assistant to the P.M. on Health Dr. Zafar Mirza on Tuesday told a virtual session of the World Health Assembly that the globe needed to unite on a coordinated, collective and sustained response to overcome the coronavirus pandemic. “Unity is vital for tackling mortality, to ease the burden on health systems and support national and global economies,” he said.

“Despite [not having as many cases as initially projected], we [Pakistan] are not complacent and are taking all possible steps to combat the outbreak,” he added.

Most of the country has now eased lockdown restrictions, with even shopping malls allowed to reopen on the directives of the Supreme Court of Pakistan. Public transport services have now also resumed in Punjab and Khyber-Pakhtunkhwa with Sindh promising to follow within a week.

Meanwhile, the Asian Development Bank on Tuesday approved a $300 million emergency assistance loan to Pakistan to strengthen the country’s health response to the COVID-19 pandemic. Of this, $100 million has been approved for the procurement of healthcare equipment and $200 million to help meet the basic needs of poor segments of society.

The Punjab government on Tuesday issued guidelines for the reopening of shopping malls and large plazas, as mandated by the Supreme Court of Pakistan. Under the standard operating procedures outlined, cinemas, play areas, food court and restaurants would remain closed. “All shops, markets, mall and businesses which have been specifically exempted are allowed to operate 7 days a week,” it added, again as mandated by the Supreme Court, which had slammed the government’s move to limit operational days to 4 days a week.

According to the Punjab Disaster Management Authority, 253 healthcare workers have been infected with COVID-19 in the province thus far.

Provincial authorities have been forced to reopen shopping malls following the Supreme Court’s orders, though have required all markets to shutter at 5 p.m.

Education Minister Saeed Ghani on Tuesday told media that the provincial government was not in a position to reopen schools, adding that even if schools were reopened right now, there was a great chance most parents would opt against potentially endangering their children by doing so.

In the interim, he announced, the government was going to launch an app that would serve as a “digital classroom” to ensure education was not neglected.

The total number of confirmed COVID-19 cases in Sindh on Wednesday morning rose to 17,947. Additionally, the province raised its casualties to 299, while its recoveries rose to 4,741. Overall, the province now has 12,907 active cases of the novel coronavirus. 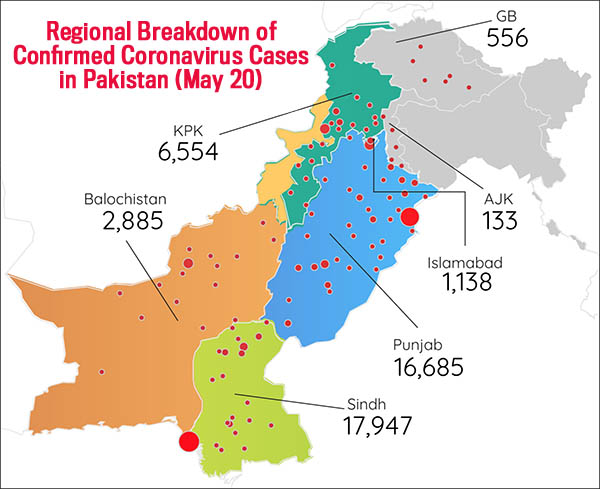 The province this week issued guidelines to resume tourism, while also resuming public transport and reopening all shopping malls and markets—all while posting the highest death toll from COVID-19 in Pakistan.

The province recorded 11 new deaths from the novel coronavirus in the 24 hours preceding Wednesday morning, bringing to 345 the total number of people dead.

Authorities also said the province now has 6,554 confirmed cases, with 2,058 recoveries. There are currently 4,151 active cases in the province.

The province has thus far reported 2,885 confirmed cases of the novel coronavirus, with 38 deaths and 608 recoveries. It currently has 2,239 active cases of COVID-19.

The provincial government on Tuesday extended its lockdown until June 2, saying the decision was taken due to the rising number of the locally transmitted coronavirus cases. As part of this extension, all public gatherings, and inter-city and inter-province travel are to remain banned.

Islamabad on Wednesday raised its confirmed COVID-19 infections to 1,138, with 9 deaths and 151 recoveries. Presently, the Islamabad Capital Territory has 978 active cases of the novel coronavirus.

In Gilgit-Baltistan, cases of the novel coronavirus rose to 556, with no new deaths and 22 recoveries. Overall, it now has 4 deaths and 390 recoveries, leaving 162 active cases.

In Pakistan-administered Kashmir, the total number of confirmed cases has increased to 133. The region has recorded no new deaths or recoveries in the past 24 hours, leaving it with 1 death and 77 recoveries. There are currently 55 active cases of the virus in the disputed region.

Globally, the virus has now infected more than 4,988,900 people, with over 324,950 reported deaths. Governments across the world have halted flights, locked down towns and cities and urged people to stay at home, but there are signs of easements to help shuttered economies recover. Overall, around 1,959,130 patients of the 4.9 million+ infected have recovered thus far.