Pakistan on Friday reported that 2,603 new infections of the novel coronavirus had been recorded over the past 24 hours, raising its confirmed cases to 50,694 against 1,067 deaths and 15,201 recoveries. Nationwide, there are currently 34,426 active cases of COVID-19.

The National Command and Operations Center coordinating the national coronavirus response has warned that a 15-20 percent spike in infections is expected in the next week.

The country currently has 21,085 beds specifically for COVID-19 patients, which the government said had 47 percent occupancy on Thursday. If the number of patients needing hospitalization increases amid the rapid spread of new infections, health experts have warned it could overburden the country’s hospitals and result in mass fatalities.

The federal government on Thursday announced it was restoring international flight operations at Peshawar airport, with Prime Minister Imran Khan announcing it would facilitate stranded Pakistanis returning home on special flights, as they would not have to secure additional transportation to reach their homes.

The Punjab government on Thursday announced it was allowing all offices, markets and shopping malls to remain open till 10 p.m. from today (Friday), even as coronavirus cases continue to spike, and there is little adherence to social distancing guidelines to halt the spread.

Announcing the decision, Punjab Industries Minister Mian Aslam Iqbal said this would reduce the crowds ahead of Eidul Fitr—though there is no evidence that it would have any such impact. The Punjab government also announced it was allowing religious shrines—often extremely crowded—to remain open 24 hours a day.

Chief Minister Murad Ali Shah on Thursday urged citizens to commemorate Eidul Fitr simply this year, as he warned that experts were predicting the coronavirus spread to get much worse in the next two weeks. “I would request the prime minister to announce the celebration of Eid with simplicity on national level,” he said, adding that he was dedicating the first day of Eid to front-line workers—doctors, nurses, paramedics, sanitary workers, police, Rangers and revenue department officials—who were fighting the virus to save the lives of others.

The total number of confirmed COVID-19 cases in the province on Friday morning rose to 19,924. Additionally, the province raised its casualties to 336, while its recoveries rose to 6,325. Overall, the province now has 13,263 active cases of the novel coronavirus. 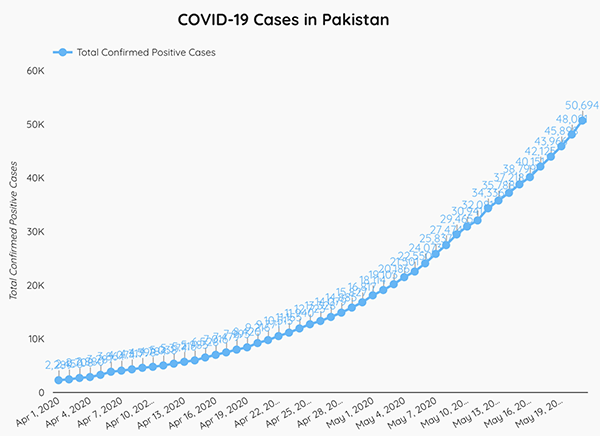 Adviser to the C.M. Ajmal Wazir on Thursday urged people to observe precautions on Eidul Fitr by staying at home, social distancing, and avoiding meeting large numbers of family and friends. He told a press conference in Peshawar that Chief Minister Mahmood Khan wanted people to celebrate this Eid with simplicity in light of the COVID-19 pandemic.

The province recorded 14 new deaths from the novel coronavirus in the 24 hours preceding Friday morning, bringing to 365 the total number of people dead. Authorities also said the province now has 7,155 confirmed cases, with 2,198 recoveries. There are currently 4,592 active cases in the province.

The province on Thursday maintained its ban on public transport, with spokesman Liaquat Shahwani saying authorities believed doing so could enable the virus to spread very rapidly.

The province has thus far reported 3,074 confirmed cases of the novel coronavirus, with 39 deaths and 724 recoveries. It currently has 2,311 active cases of COVID-19.

Islamabad on Friday raised its confirmed COVID-19 infections to 1,326, with 12 deaths and 151 recoveries. Presently, the Islamabad Capital Territory has 1,163 active cases of the novel coronavirus.

In Gilgit-Baltistan, cases of the novel coronavirus rose to 602, with no new deaths and 10 recoveries. Overall, it now has 4 deaths and 412 recoveries, leaving 186 active cases.

In Pakistan-administered Kashmir, the total number of confirmed cases has increased to 158. The region recorded no new deaths or recoveries in the past 24 hours, leaving it with 1 death and 79 recoveries. There are currently 78 active cases of the virus in the disputed region.

Globally, the virus has now infected more than 5,197,730 people, with over 334,670 reported deaths. Governments across the world have halted flights, locked down towns and cities and urged people to stay at home, but there are signs of easements to help shuttered economies recover. Overall, around 2,082,625 patients of the 5.1 million+ infected have recovered thus far.