Nationwide, there have been 667 deaths reported from the disease and 8,212 recoveries, leaving 22,062 active cases

Pakistan on Monday raised the number of coronavirus cases recorded by authorities to 30,941 after 1,476 new cases were reported in the past 24 hours.

A day earlier, the country had witnessed its largest spike in cases thus far, recording 1,991 new infections against 13,502 tests, also a new peak for the number of the tests administered to detect the spread of the virus.

The government on Sunday extended a ban on domestic flight travel to May 13 (Wednesday), a day after provincial governments announced movement restrictions designed to curb the spread of COVID-19 would continue until May 31 with a few additional exempted businesses to help the economy recover.

Over the past 24 hours, Pakistan has recorded 28 new deaths and 189 recoveries, raising the total fatalities to 667 and overall recoveries to 8,212, respectively. The country currently has 22,062 active cases of the novel coronavirus, 1,259 more than a day earlier.

The Government of Pakistan, led by Prime Minister Imran Khan, maintains that the spread of COVID-19 in the country is “within projections” and it is now time to open up various sectors of the economy to overcome the impact of the pandemic. However, healthcare professionals have claimed the opposite, warning the situation is rapidly spiraling out of control and urged the government to extend and further strengthen existing movement restrictions rather than ease them.

The majority of the cases continue to be reported from provincial capital Lahore, according to the Punjab Disaster Management Authority, though the government has not reflected this in any additional precautionary measures for the urban center under the so-called ‘smart’ lockdown policies backed by the federal government.

Five staff members of the Sindh Chief Minister’s House tested positive for the coronavirus over the weekend, including a clerk and a driver, raising fears that the disease is continuing to spread due to laxity in preventative measures.

On Monday morning, the total number of confirmed COVID-19 cases in Sindh rose to 11,480. Additionally, the province raised its casualties to 189, while its recoveries rose to 2,081. Overall, the province now has 9,210 active cases of the novel coronavirus. 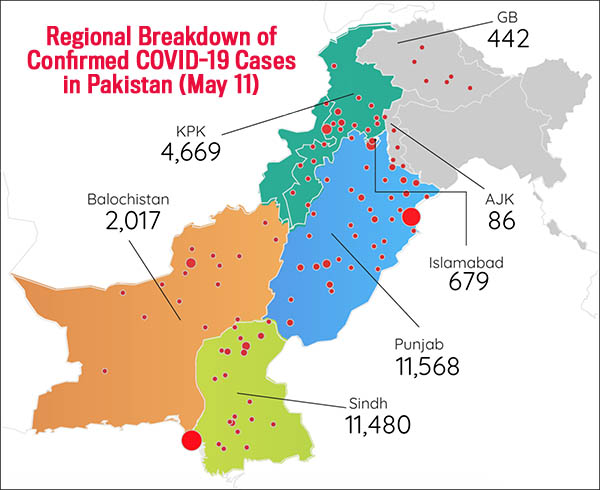 The province continues to report the highest fatality rate in Pakistan, reaching 245 deaths on Monday morning. Overall, the province has now recorded 4,669 confirmed cases of the novel coronavirus, with 1,126 recoveries.

On Sunday, Khyber-Pakhtunkhwa Health and Finance Minister Taimur Jhagra appeared in a press conference with representatives of various healthcare bodies. The gathered representatives vowed to set aside political differences and work together to overcome the COVID-19 pandemic.

The province has thus far reported 2,017 confirmed cases of the novel coronavirus, with 26 deaths and 242 recoveries. It currently has 1,749 active cases of COVID-19.

Islamabad on Monday raised its confirmed COVID-19 infections to 679, with 6 deaths and 72 recoveries. Presently, the Islamabad Capital Territory has 601 active cases of the novel coronavirus.

In Gilgit-Baltistan, cases of the novel coronavirus rose to 442, with 4 deaths and 304 recoveries. Overall, it has 134 active cases.

In Pakistan-administered Kashmir, the total number of confirmed cases climbed to 86, with no deaths and 64 recoveries. It currently has 22 active cases of the virus.

Globally, the virus has now infected more than 4,180,900 people, with over 283,860 reported deaths. Governments across the world have halted flights, locked down towns and cities and urged people to stay at home, but there are signs of easements to help shuttered economies recover. Overall, around 1,493,400 patients of the 4 million+ infected have recovered thus far.