Pakistan on Monday reported 5,248 new confirmed cases of the novel coronavirus, raising to 144,478 the persons who have thus far been diagnosed with the disease.

In the 24 hours preceding 8:00 a.m., Monday, the country recorded 97 deaths, increasing total deaths to 2,729. In the same time, 1,986 patients tested negative, raising recoveries to 53,721. There are currently 88,028 active cases of COVID-19 in the country, with the National Command and Operation Center reporting 3,144 of them are in critical condition.

Planning Minister Asad Umar on Sunday warned at a press conference that if the public continued to ignore the government’s standard operating procedures (SOPs) to curb the spread of coronavirus, confirmed infections nationwide could increase to 300,000 by the end of June, and soar to more than a 1 million by the end of July.

Urging the public to “change its attitude,” he said studies showed mandatory wearing of masks could reduce the spread of the infection by up to 50 percent, adding that the government hoped to increase its testing capacity to 150,000 tests/day in the next four to six weeks.

The provincial government had sought to impose a two-week lockdown in capital Lahore, as the city continues to account for nearly half of all confirmed cases of COVID-19 in the province. However, Prime Minister Imran Khan, in violation of his claims that provinces could adopt preventative measures as they saw fit, rejected this measure and again reiterated his preference for “SOPs,” whose enforcement leaves much to be desired.

On Monday, authorities reported 62 new deaths due to COVID-19, raising total fatalities to 1,031. The province also reported 1,204 new infections, raising confirmed cases to 54,138, against 17,710 recoveries. There are now 35,397 active cases of the virus in Punjab province.

The provincial government has decided not to permit cattle markets for Eidul Azha, with Local Government Secretary Roshan Ali Shaikh saying there was too much risk of the coronavirus spreading and cattle markets cannot be allowed to open.

Adviser to the C.M. on Information Ajmal Wazir on Saturday said the province had decided to increase the capacity of hospitals to cope with intensive care patients as infections of COVID-19 continue to climb.

The province reported 14 new deaths on Monday morning, raising its death toll to 675. In the past 24 hours, its recoveries rose by 248 to 4,539, while its confirmed cases have increased to 18,013. There are currently 12,799 active cases of coronavirus in the province. 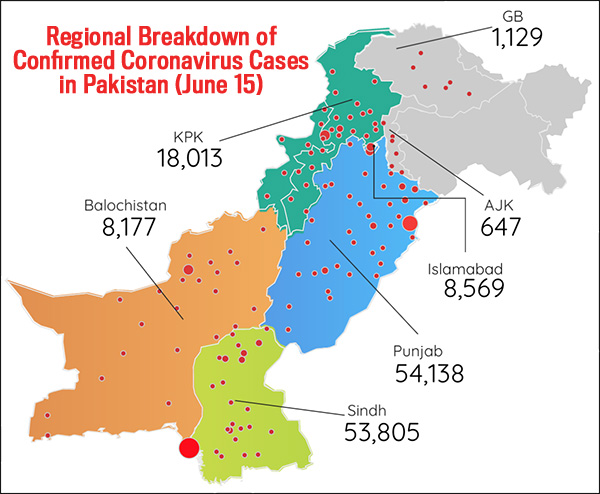 Provincial spokesman Liaquat Shahwani on Sunday announced that the government was withdrawing its earlier decision to allow hotels and restaurants to resume dine-in services due to a surge in reports of SOP violations. “Hotels and restaurants will still be allowed to entertain takeaway and delivery orders,” he said in a posting on Twitter.

Confirmed cases of the novel coronavirus in the province on Monday rose by 149 to 8,177, with 2 new deaths increasing fatalities to 85. Overall, 2,859 patients have recovered from the deadly virus, while there are currently 5,233 active cases of COVID-19.

The federal capital on Monday raised its confirmed coronavirus cases to 8,569, with 78 fatalities. Overall there have been 2,037 recoveries, leaving 6,454 active cases of COVID-19.

Confirmed cases of the novel coronavirus in Gilgit-Baltistan rose to 1,129 on Monday morning. Overall, the region has thus far reported 16 deaths and 716 recoveries, leaving 397 active cases.

In Pakistan-administered Kashmir, confirmed cases increased to 647. In the past 24 hours, the region’s death toll has reached 13, while 254 people have fully recovered. There are now 380 active cases of the coronavirus in the region.

Globally, the virus has now infected more than 7,990,150 people, with over 435,495 reported deaths. Governments across the world have halted flights, locked down towns and cities and urged people to stay at home, but there are signs of easements in nations that have reined in the virus’ spread to help shuttered economies recover. Overall, around 4,108,050 patients of the 7.9 million+ infected have recovered thus far.