Nationwide, there have been 66 deaths from the deadly disease and 727 recoveries

The confirmed number of coronavirus cases in Pakistan on Friday rose to 4,601, with the National Institute of Health’s official dashboard reporting that 727 of those had now fully recovered while 66 had died and 45 were currently in critical care.

The highest number of infections is currently being reported from Punjab, which is also the country’s most heavily populated province. Chief Minister Usman Buzdar on Twitter said that the province now had 2,279 confirmed cases of COVID-19, with 701 of those being reported from returning pilgrims from Iran; 696 from members of the Tablighi Jamaat; 70 from prisoners; and 803 from the rest of the province.

“Sadly we’ve lost 18 precious lives, while 39 patients recovered!” he said, adding that thus far the province had conducted 31,535 tests for the novel coronavirus. The district with the largest spread in Punjab is provincial capital Lahore, which alone has reported 363 cases of the virus. The second highest is Gujrat with 99 patients.

In Sindh, the rate of testing is far lower, with the provincial Health Department reporting that thus far they had only administered 11,623 tests for the novel coronavirus. The province has reported 1,128 confirmed cases of COVID-19, with 349 recoveries and 21 deaths—leaving 758 active cases, against 736 a day earlier, showing that the number of infections continues to rise daily despite ongoing lockdowns to encourage social distancing and curb the spread of the coronavirus.

Sindh Chief Minister Murad Ali Shah on Thursday announced that the provincial government wants a strictly enforced lockdown of at least one additional week from April 14-21, saying the current restrictions are proving insufficient to prevent the virus from spreading among the population. 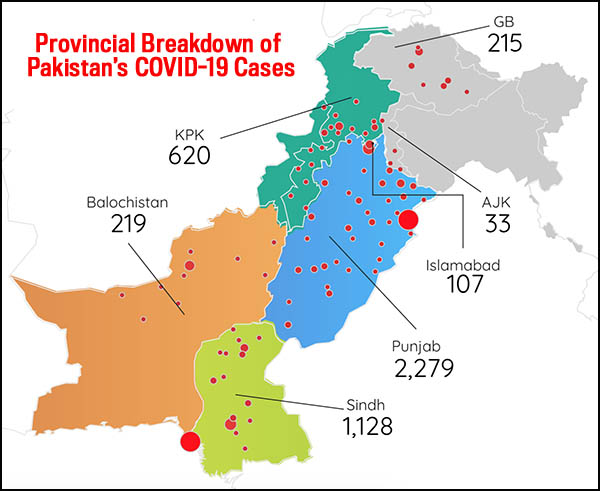 In Khyber-Pakhtunkhwa, Finance and Health Minister Taimur Jhagra reported that the province had recorded 65 new cases in the past 24 hours, raising the provincial tally to 620. Of these, 552 are among the local population while 68 are from among returning pilgrims from Iran. Overall, the province has reported 22 deaths and 128 recoveries.

Balochistan province reported its first casualty from the coronavirus on Thursday, as the number of confirmed cases there rose to 219 with 89 recoveries. The province is thus far the only government that has already announced that its lockdown will continue till April 21 in a bid to curb the spread of the coronavirus.

In the federal capital, five new cases were reported overnight, bringing its tally to 107. Similarly, in Gilgit-Baltistan, two more cases were recorded, bringing its total to 215. And in Pakistan-administered Kashmir, which has thus far reported no deaths from COVID-19, the total number of confirmed coronavirus cases rose by five to 33.

Globally, the virus has now infected more than 1,605,200 people, with over 95,750 reported deaths. Governments across the world have halted flights, locked down towns and cities and urged people to stay at home. Overall, around 356,900 patients of the 1.6 million+ infected have recovered thus far.