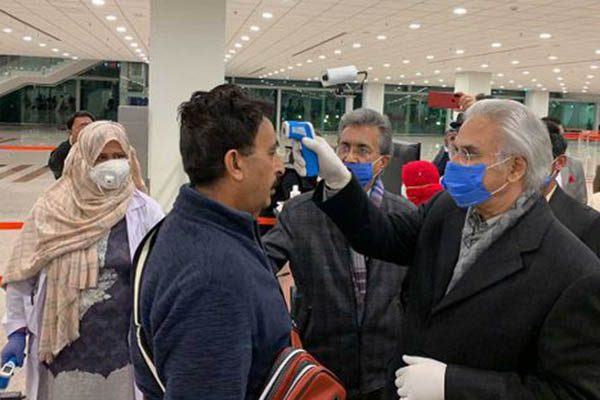 The confirmed number of coronavirus cases in Pakistan reached 4,081 on Wednesday morning, 41 days after the country reported its first COVID-19 patient and a mere 3 days after it reported its 3,000th.

“Pakistan got its first COVID-19 patient on Feb. 26. We got our 1,000th patient in 29 days. The 2,000th patient in 7 days, 3,000th patient in 5 days and probably the 4,000th patient in 3 days,” posted Adviser to the Sindh C.M. Senator Murtaza Wahab on Twitter on Tuesday night, as he urged people to exercise greater caution and to not take lightly the threat posed by the coronavirus. “This is how serious the situation is. Pakistaniyo please wake up before its too late,” he added.

In Sindh province, the majority of cases are now from local transmission, and not foreign travelers. According to the Sindh Health Department, of the 986 confirmed patients in the province, 640 were a result of local spread. However, the number is deceptively high, as 269 people—more than half the nationwide recoveries—in the province have recovered, leaving 699 active cases right now.

On Wednesday morning, the health minister of Pakistan-administered Kashmir told media that the number of confirmed coronavirus cases in the region had increased by nine, bringing the overall tally to 28 from 19 a day earlier. One of the confirmed patients, per the minister, is a doctor who was treating COVID-19 infections.

In Khyber-Pakhtunkhwa, Health and Finance Minister Taimur Jhagra posted a daily update on Twitter in which he confirmed that another 27 cases of the coronavirus had been found in the province, raising the regional tally to 527. “527 cases in all (from 500 the previous day),” he said. “One additional death, taking the total to 18. A total of 70 recoveries.”

The Government of Punjab, via its official Twitter account, said that of the 2,030 confirmed cases in the province, 572 were from members of the Tablighi Jamaat; 695 in returning pilgrims from Iran; 49 prisoners; and 714 from various parts of the province. Apart from the Tablighi and pilgrim cases, the highest number of patients has been recorded in provincial capital Lahore, 328. 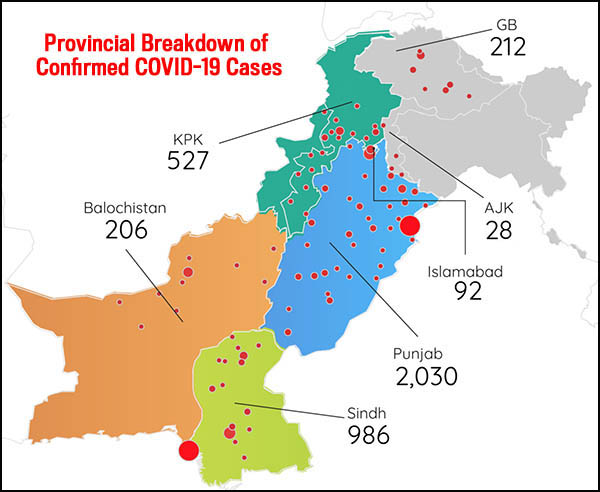 The Balochistan Health Department, on Tuesday night, reported that two new coronavirus cases had been confirmed in the province, taking its tally to 206. It added that one person had died from the virus in the past 24 hours, raising to 2 the number of people who have died due to COVID-19 in the province.

According to the Government of Pakistan’s official COVID-19 portal, the country has thus far administered 42,159 tests for the coronavirus—in a nation of some 220 million people. Provincially, Punjab has conducted the most tests so far, 19,770; Sindh, 10,233; Khyber-Pakhtunkhwa, 3,068; Balochistan, 2,985; Pakistan-administered Kashmir, 419; Gilgit-Baltistan, 1,213; Islamabad, 2,964. Discrepancies between total tests conducted and those from the provinces are largely due to information from provincial labs not being updated in the national tally.

Globally, the virus has now infected more than 1,424,300 people, with over 81,900 reported deaths. Governments across the world have halted flights, locked down towns and cities and urged people to stay at home. Overall, around 302,200 patients of the 1 million+ infected have recovered thus far.