Nationwide, 40 people have been reported to have died due to COVID-19, while there have been 130 full recoveries thus far

The number of deaths Pakistan has attributed to COVID-19 rose to 40 on Saturday morning, as authorities reported that the nationwide tally of confirmed cases of the deadly disease had risen to 2,708, with 130 full recoveries.

Pakistan’s most populous province, Punjab remains the worst affected by the virus, with the government’s official dashboard raising the number of confirmed cases there to 1,072. Earlier, on Friday night, the Disaster Management Authority in Punjab posted on Twitter that “as we pass this grim number [of a 1,000], we are doubling down on efforts to curb and end this coronavirus pandemic.”

The Raiwind congregation appears to be emerging as the second epicenter of coronavirus spread in Pakistan after the initial jump in numbers from pilgrims returning from Iran. In Punjab alone, 224 people have tested positive for the disease at the Raiwind quarantine, which is primarily made up of members of the Tablighi Jamaat. The Jamaat had, despite warnings from experts and the governments, proceeded with its annual gathering on the outskirts of Lahore last month. Attracting thousands, the event was cancelled within a day, but two weeks after its abrupt end, there are numerous cases of coronavirus appearing among its participants. The incubation period for the coronavirus is generally around 2 weeks.

The Sindh Health Department, late on Thursday, posted on Twitter that the province had witnessed 14 deaths from the deadly disease thus far, 12 in Karachi and 2 in Hyderabad. It said that 38 new cases of local transmission had been found in Karachi in less than 12 hours, while there were also reports of local transmission in other parts of the province. Meeran Yousuf, media coordinator for the Sindh Health Department, said that the provincial testing capacity was limited to 1,200, with three batches of 400 tests being administered daily.

The lack of testing capacity is believed to be responsible for Punjab overtaking Sindh in confirmed coronavirus cases. According to information provided by the National Institute of Health, Punjab has tested over 17,000 people thus far, while Sindh still lags behind at around 7,500. 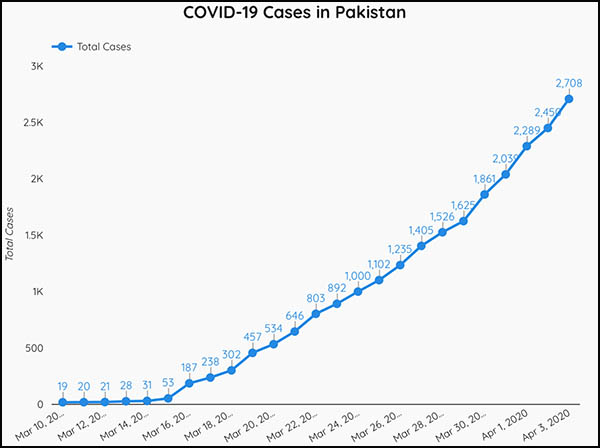 The least number of tests has been administered by the Khyber-Pakhtunkhwa government, which has thus far conducted less than 2,000. At 343 confirmed cases, the province has also reported 11 deaths—including the first doctor to die of COVID-19 complications. On Friday, Khyber-Pakhtunkhwa Health Minister Taimur Jhagra confirmed that over 100 Iranian pilgrims who had been under quarantine were now free to return home as their isolation period was over. “Many of you who tested positive may hopefully now be immune to the coronavirus as well,” he added.

In Islamabad, District Commissioner Hamza Shafqaat posted on Twitter that the federal capital had tested over 1,500 people thus far, with the majority of those having been tested upon their arrival to Pakistan.

In Balochistan, spokesperson Liaquat Shahwani said that the province had administered 2,311 tests for coronavirus thus far, and 175 had tested positive so far. He said the provincial government was testing all pilgrims returning from Iran, but there were some asymptomatic patients who could not be detected and were being subsequently found upon their return to their homes in neighboring provinces. He said that the government believed there were 1,800-2,000 pilgrims still in Iran, who would be returning to Pakistan in the coming days. 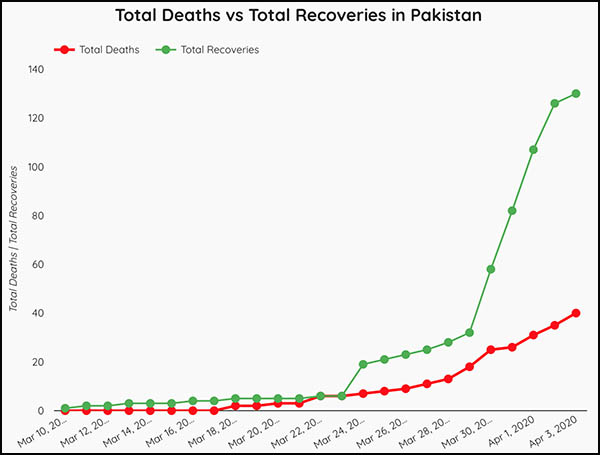 After repeatedly claiming lockdowns could not be implemented in Pakistan, Prime Minister Imran Khan has now come on the side of finding a balance between lockdowns and essential industries—similar to every other country that is mandating lockdowns to curb the spread of the disease.

Most parts of the country remain under various movement restrictions—to continue until April 14. Public and private offices remain closed, apart from businesses deemed ‘essential,’ and public and private gatherings have also been banned.

Globally, the virus has now infected more than 1,099,000 people, with over 59,100 reported deaths. Governments across the world have halted flights, locked down towns and cities and urged people to stay at home. Overall, around 229,000 patients of the 1 million+ infected have recovered thus far.