Pakistan on Monday reported 1,653 new recoveries, bringing to 77.7 percent the overall recovery rate from the novel coronavirus in the country. At the same time, 1,587 new infections of COVID-19 were recorded after conducting 19,108 tests—a positivity ratio of 8.3 percent.

Planning Minister Asad Umar has told daily Dawn that while new infections of COVID-19 are on the decline, there is great fear that the virus will surge once more during Eidul Azha. “I am not worried about Eid prayers as people follow the SOPs during prayers,” he said, although there are multiple reports of SOP violations during Eidul Fitr prayers. “I fear that the people may not follow the SOPs at cattle markets and in others markets during Eid shopping as they did the same on the occasion of Eidul Fitr,” he added.

Meanwhile, Special Assistant to the P.M. Zafar Mirza said that while testing was important, Pakistan’s decline in daily tests did not mean it’s data was faulty. “We have collected data from hospitals and majority of them, apart from a few in Sindh, have told us that less number of people have been visiting hospitals,” he said.

Despite the optimism due to Pakistan’s declining positivity rate, health experts have warned that the country has yet to fully utilize its claimed capacity of 71,780—and is testing significantly below numbers proposed by global health experts, likely only recording the most symptomatic patients while ignoring the spread among asymptomatic carriers.

Chief Minister Usman Buzdar on Saturday announced strict implementation of preventative measures over Eidul Azha to curb the spread of the novel coronavirus. Presiding over a high-level meeting, he urged people to stay home and stay safe, adding that it was only through cooperation that we could overcome the virus. “Less human interaction will help contain the spread of this highly contagious disease,” he said.

On Monday, authorities reported 4 new deaths due to COVID-19, raising total fatalities to 2,083. The province also reported 398 new infections, raising confirmed cases to 90,191, against 65,689 recoveries. There are now 22,419 active cases of the virus in Punjab province.

Adviser to the C.M. Murtaza Wahab on Sunday said that thus far 3,249 children under-10 had contracted COVID-19 in the province, adding this stood in contrast to the 22,554 people over-50 who had also been infected. In a posting on Twitter, he urged people to continue practicing all social distancing guidelines, adding they should not come out of their homes for non-essential activities.

“The infection rate has come down but we have to ensure there is no spike during Eidul Azha,” he warned.

In a notification issued on Sunday, the district administration of Mansehra discouraged tourists from traveling to Kaghan valley, Shogran and other areas, as tourism had not yet been reopened in light of the coronavirus pandemic. The notification warned that any non-residents found trying to enter the region would be turned back.

The provincial government on Monday reported 3 new deaths, raising its death toll to 1,142. In the past 24 hours, its recoveries rose to 25,006, while its confirmed cases have increased by 196 to 32,086. There are currently 5,938 active cases of coronavirus in the province. 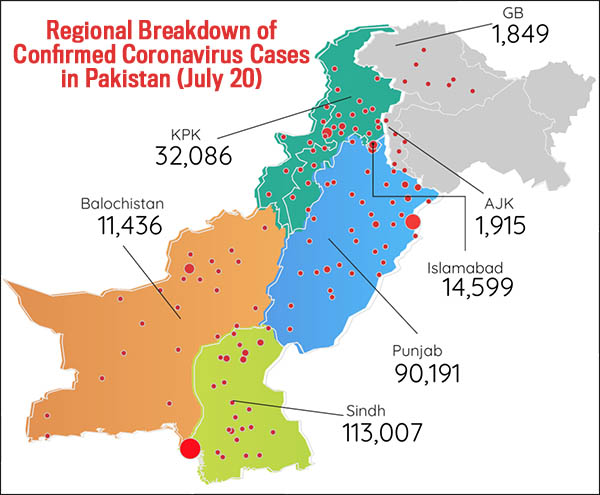 Spokesman Liaquat Shahwani on Sunday said the provincial government had eased lockdown timings in view of declining spread of COVID-19, adding that all businesses would now be permitted to operate from 9 a.m. to 10 p.m. daily. He told journalists in Quetta that 20 districts had reported zero new cases in the past week. He said if this trend continued, the government would consider reopening schools, parks and marriage halls.

Confirmed cases of the novel coronavirus in the province on Monday rose by 12 to 11,436. Overall, 132 people have died and 8,688 patients have fully recovered from the virus, leaving 2,616 active cases of COVID-19.

Islamabad on Monday raised its confirmed coronavirus cases by 23 to 14,599. There were 2 new deaths and 0 new recoveries in the past 24 hours, raising death toll to 159 and sustaining recoveries at 11,836, leaving 2,604 active cases.

Confirmed cases of the novel coronavirus in Gilgit-Baltistan rose by 42 on Monday to 1,849. The region reported 2 new deaths, raising toll to 43, while its recoveries have increased by 12 to 1,472, leaving 334 active cases.

In Pakistan-administered Kashmir, confirmed cases have increased by 27 to 1,915. There were no new deaths and 27 recoveries in the past 24 hours, leaving 47 fatalities and 1,201 fully recovered. It has 667 active cases of COVID-19.

Globally, the virus has now infected more than 14,644,360 people, with over 608,911 reported deaths. Governments across the word halted flights, locked down towns and cities and urged people to stay at home at the peak of the virus’s spread, but there are now signs of easements in nations that have reined it in to help shuttered economies recover. Overall, around 8,735,298 patients of the 14.6 million+ infected have recovered thus far.