The deaths caused by the novel coronavirus in Pakistan on Wednesday climbed to 526 after authorities reported 40 new deaths in the past 24 hours—the highest single day spike in fatalities thus far.

The past 24 hours also marked the first time that Pakistan administered more than 10,000 tests, with total tests conducted climbing to 232,582. Overall, the country now has 22,550 confirmed cases of COVID-19 and 6,217 recoveries. There are currently 15,807 active cases of coronavirus in the country, 574 more than a day earlier.

For the second day running, Punjab province administered the highest number of tests: 5,030. Trailing behind are Sindh with 2,250 tests; Khyber-Pakhtunkhwa 870; Islamabad 888; Gilgit-Baltistan 167; Pakistan-administered Kashmir 110; and Balochistan 863.

The federal cabinet, led by Prime Minister Imran Khan, on Tuesday approved easing in lockdown restrictions despite the rising tally, as Pakistan Tehreek-e-Insaf lawmakers continue to claim that the virus is “not as bad” in Pakistan as it in other parts of the world. The National Coordination Committee on COVID-19 is set to meet today (Wednesday) to deliberate on which businesses and industries would be reopened in the first phase.

According to local media, the prime minister has expressed an interest in allowing small traders and transporters to resume work. Doctors, meanwhile, have warned that this could further spread the virus, and have urged the government to extend, rather than ease, the existing lockdowns.

The country’s most populous province has already indicated it is ready to further ease an already middling lockdown to allow various businesses and industries to resume operations. The provincial government has claimed strict standard operating procedures would be followed to maintain social distancing and curb the spread of COVID-19, but there is little indication of how successful these may prove, as various surveys have found similar restrictions are not being implemented in mosques.

The province recorded 317 new infections in the past 24 hours, raising its total confirmed COVID-19 cases to 8,420. Punjab also reported 20 new deaths, bringing its casualty count to 156.

Overall, the province has reported 3,073 recoveries, leaving 5,191 active cases, 60 less than a day earlier. The majority of the cases continue to be reported from Lahore, according to the Punjab Disaster Management Authority.

The province that has been advocating against easing lockdown restrictions on Tuesday sealed Saeedabad town in Matiari district after six cases were discovered there in a single day.

The total number of confirmed COVID-19 cases in Sindh rose to 8,189 on Wednesday, with 307 new infections recorded. Additionally, the province recorded 11 new deaths, raising its casualties to 148, while its recoveries rose by 42 to 1,671.

Overall, the province currently has 6,370 active cases right now, 254 more than a day ago. 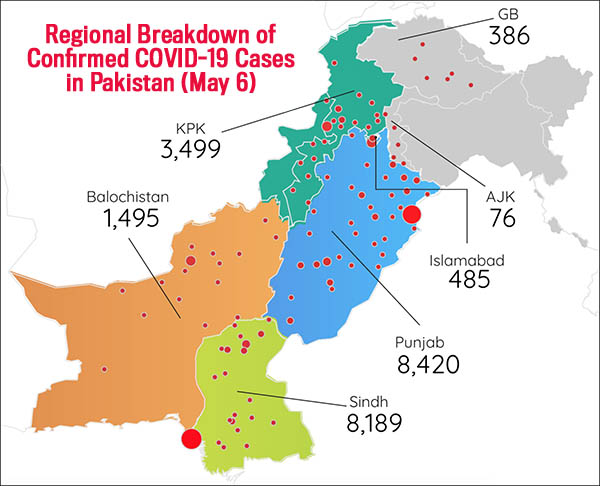 The province’s fatalities due to COVID-19 climbed to 194 on Wednesday, 9 more than a day earlier. This remains the highest COVID-19-related fatality rate in the country, exceeding by nearly 40 the deaths thus far reported in Punjab, which has the second highest death toll.

Overall, the province has now recorded 3,499 confirmed cases of the novel coronavirus, with 875 recoveries. It currently has 2,430 active cases, 183 more than a day earlier.

The province has thus far reported 1,495 confirmed cases of the novel coronavirus, with 21 deaths and 206 recoveries. It currently has 1,268 active cases, 165 more than a day earlier. The province has not reported any new deaths in the past 24 hours, but has witnessed 9 new recoveries.

Provincial government spokesman Liaquat Shahwani on Tuesday announced that in addition to extending movement restrictions until May 19 to curb the spread of the virus, authorities had now decided to only test individuals with visible symptoms of COVID-19, as there were running short of testing kits. This is a worrying development, as without monitoring the rate of asymptomatic spread, the province will be unable to truly

It also raises questions about the National Disaster Management Authority’s claims that the country has sufficient testing kits to conduct more than 25,000 tests/day if it cannot even fulfill a 1,000 tests/day for Balochistan.

Islamabad on Wednesday raised its confirmed COVID-19 infections to 485, with no new deaths or recoveries. Thus far, the Islamabad Capital Territory has reported 4 deaths and 56 recoveries, leaving 425 active cases, 21 more than a day earlier.

In Gilgit-Baltistan, cases of the novel coronavirus rose to 386, with no new deaths and 3 new recoveries. Overall, 3 deaths due to COVID-19 have been reported from the region, and 282 recoveries, leaving 101 active cases, 11 more than a day earlier.

In Pakistan-administered Kashmir, the total number of confirmed cases climbed to 76, with no new deaths. However, 5 new recoveries were recorded, raising its tally to 54. Overall, it has 22 active cases of the virus.

Globally, the virus has now infected more than 3,727,900 people, with over 258,300 reported deaths. Governments across the world have halted flights, locked down towns and cities and urged people to stay at home, but there are signs of easements to help shuttered economies recover. Overall, around 1,242,430 patients of the 3.7 million+ infected have recovered thus far.