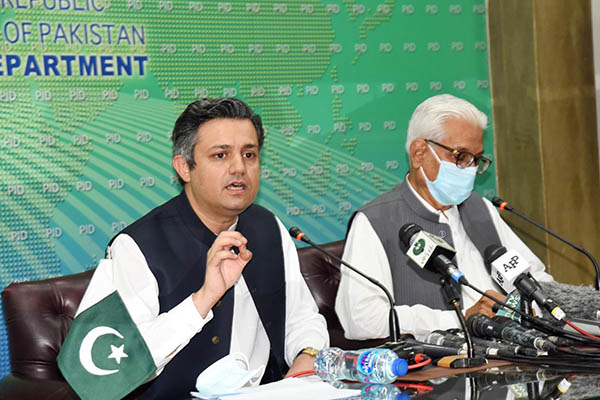 Energy Minister Hammad Azhar and Special Assistant to the P.M. on Finance Waqar Masood Khan on Monday announced that Pakistan’s Council of Common Interests had unanimously approved the National Electricity Policy 2021, adding that this would remain in effect for 10 years.

Azhar told a press conference that the new policy would help the government boost its power generation capacity on the basis of low-cost, locally-available fuel, and through an open and transparent bidding process. He said it envisaged several sub-policies, which would be deliberated upon and included in the national power plan.

While Azhar did not reveal details about the policy, he said it aimed at achievable targets for renewable energy and hydropower generation projects with a long-term view. He said the meeting of the CCI had also agreed with the federal government to initiate security operations against electricity theft and tariff recovery, reiterating a claim of some areas reporting 70 percent in electricity losses.

Per routine, the minister criticized the governments of Pakistan Peoples Party and Pakistan Muslim League (Nawaz)—now out of power for over three years—for establishing new power plants with short-term gains that hampered the country’s foreign exchange reserves. He said that in addition to power generation, the new policy would cover distribution and transmission to overcome the high circular debt that has plagued the incumbent government throughout its tenure.

He said the National Electricity Policy 2021 had been developed through consultation, adding it envisaged universal, affordable access to electricity through a self-sustainable power sector. It would also achieve uninterrupted supply, he claimed, through localization and fuel diversification, as well as infrastructure resilience. It would be sustainable, he stressed, and would pose a minimum threat to environmental degradation.

According to the minister, the policy would focus on upgradation of technology, and would align consumer tariffs with timely recoveries, while imposing a uniform tariff for state-owned distribution companies and K-Electric. Targeted subsidies would also be provided for the impoverished. He said the nest step was the preparation of a five-year national electricity plan, which would be monitored by the Power Division to ensure its implementation.

During the press conference, SAPM Masood announced that Saudi Arabia had offered an annual $1.5 billion oil facility. He said that the facility would allow Pakistan to import oil from the Gulf kingdom on deferred payments. He refused to respond to questions on why this had been halved, as Pakistan had earlier been granted a $3 billion facility for three years that had been cancelled early owing to rifts in bilateral ties.

He said the government had kept the prices of petroleum products stable for around four months despite a surge in international prices. “We have set these targets on the basis of potential of this sector and expected developments,” he said, referring to the collections envisaged in the federal budget for fiscal year 2021-22. He claimed the government had made very realistic estimates about its target of collecting Rs. 610 billion in petroleum levy during the next fiscal year, adding that lifting of sanctions on Iran would help Tehran increase production and lead to lower fuel prices.

Addressing concerns of the opposition and independent economists who have claimed the government’s revenue targets are unrealistic, he said that in actuality the government had not taken 25 options into account while finalizing the next year’s budget. Among this, he said, was the possibility of privatizing several state-owned enterprises, as well as the launch of 5th generation telecommunication licenses and renewal of the existing spectrum.