Planning Minister Asad Umar, who also heads the National Command and Operation Centre (NCOC), rejected on Thursday the perception that the recent decline in cases was due to a reduction in daily tests. “Some saying, cases are down only due to testing reduction. If positivity ratio was same as in mid-June that is over 22 percent, the 24,262 tests done on Wednesday would have resulted in 5,500 cases, while the actual number was 2,145,” he posted on Twitter.

He claimed the reduction in cases was due to effective SOP enforcement and the public’s adoption of social distancing guidelines. He warned that the pandemic could spread through the irresponsible behavior of people who do not follow precautionary measures.

Despite the optimism due to Pakistan’s declining positivity rate, health experts continue to warn that the country is still testing far below its claimed capacity of 71,780—and significantly below the numbers proposed by global health experts—and is likely only recording the most symptomatic patients while ignoring the spread among asymptomatic carriers.

Health Minister Dr. Yasmin Rashid on Thursday, while visiting Multan, said doctors and healthcare workers were on the front-lines in the war against coronavirus, adding that they should be appreciated for their dedication and hard work.

On Friday, authorities reported 8 new deaths due to COVID-19, raising total fatalities to 2,059. The province also reported 484 new infections, raising confirmed cases to 89,023, against 64,815 recoveries. There are now 22,149 active cases of the virus in Punjab province.

In his daily press briefing, Chief Minister Murad Ali Shah continued to urge people to stay safe from the novel coronavirus by wearing masks outside their homes, frequently washing and sanitizing their hands, and ensuring social distancing in public places. He said 4,872 patients in the province had recovered overnight, raising to 65 percent the percentage of recoveries.

Special Assistant to the C.M. on Information Kamran Khan Bangash on Thursday said the recovery rate of COVID-19 patients in the province had increased to 71 percent, while the positivity ratio had reduced to 15 percent. “The epidemic is not over yet and the fight is still going on,” he warned. “Ensuring social distancing during Eidul Azha is imperative so the government’s hard work and care might not be wasted,” he added.

The provincial government on Friday reported 4 new deaths, raising its death toll to 1,124. In the past 24 hours, its recoveries rose to 22,613, while its confirmed cases have increased by 269 to 31,486. There are currently 7,749 active cases of coronavirus in the province. 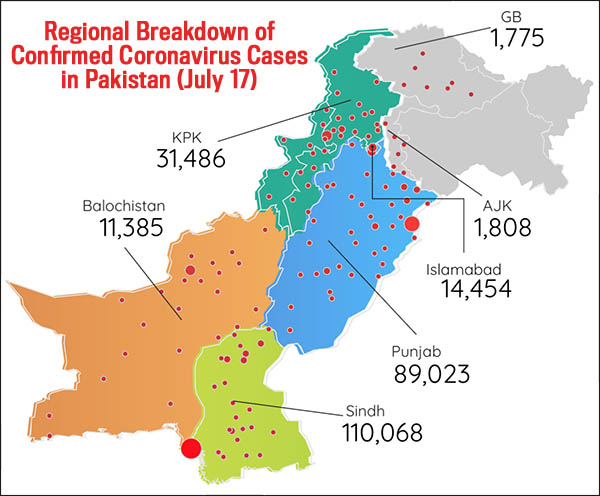 Provincial spokesman Liaquat Shahwani on Thursday urged the public to continue to practice social distancing and preventative measures to ensure the virus does not re-emerge during Eidul Azha. In a press conference, he said that people had ignored SOPs during Eidul Fitr, resulting in an 80 percent jump in new infections nationwide.

Confirmed cases of the novel coronavirus in the province on Friday rose by 63 to 11,385. Overall, 128 people have died and 8,161 patients have fully recovered from the virus, leaving 3,096 active cases of COVID-19.

Confirmed cases of the novel coronavirus in Gilgit-Baltistan rose by 25 on Friday to 1,775. The region reported 1 new death, raising toll to 39, while its recoveries have increased by 7 to 1,396, leaving 340 active cases.

In Pakistan-administered Kashmir, confirmed cases have increased by 37 to 1,808. There were no new deaths and 16 recoveries in the past 24 hours, leaving 46 fatalities and 1,077 fully recovered. It has 685 active cases of COVID-19.

Globally, the virus has now infected more than 13,949,386 people, with over 592,690 reported deaths. Governments across the word halted flights, locked down towns and cities and urged people to stay at home at the peak of the virus’s spread, but there are now signs of easements in nations that have reined it in to help shuttered economies recover. Overall, around 8,278,974 patients of the 13.9 million+ infected have recovered thus far.