The total number of confirmed coronavirus cases in Pakistan hit 4,339 on Thursday morning, with 63 reported deaths and 572 recoveries.

The country’s most populous province, Punjab, has reported the highest number of cases at 2,188. On Wednesday night, provincial authorities reported one death due to the novel coronavirus. The latest victim was a 32-year-old woman who had a pre-existing kidney ailment prior to contracting COVID-19, putting her at greatest risk from the effects of the disease. Overall, 17 people have died due to coronavirus in the province.

Of the 2,188 cases, the Punjab Disaster Management Authority says, 35 have fully recovered, while 58 are among prisoners in jail. Troublingly, the largest number of cases is no longer among returning pilgrims from Iran (695) or the Raiwind Tablighi Jamaat (657), but rather among citizens across the province (756).

As the cases of local spread rise, authorities have urged citizens to practice social distancing and avoid leaving their homes as much as possible. “We urge the citizens to follow precautionary measures & stay indoors!” posted Chief Minister Usman Buzdar on Twitter, adding that the largest number of cases, 347, had been reported from provincial capital Lahore.

In Sindh province, the majority of cases are now from local transmission. According to the Sindh Health Department, there are currently 736 active cases in the province, as 280 people have recovered while 20 have died.

The provincial government has said that it will begin to ease restrictions from next week to help businesses get back on their feet, but a visiting delegation of Chinese experts has urged Chief Minister Murad Ali Shah to extend the ongoing lockdown to curb the spread of coronavirus. There are also fears that if the city returns to normal too soon, the virus could spread among slum communities, where large numbers of people live in cramped houses, potentially putting thousands at risk of contracting COVID-19.

On Thursday, the Sindh government issued revised guidelines for charities involved in ration distribution among the needy in the province. Under the new procedures, charity organizations would have to register themselves via a mobile app and would only be allowed to distribute rations between 4 a.m. and 7 a.m. The government has warned that ration distribution would be halted if the law and order situation worsens. 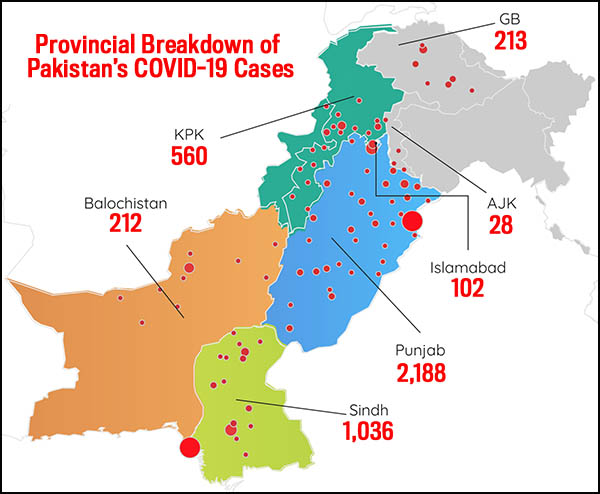 Provincial health and finance Minister Taimur Jhagra posted on Twitter that the province had recorded 33 new cases, taking its total to 560. He said that two more deaths had also been reported, taking the total people who have died from COVID-19 in the province thus far to 20. Overall, 122 people have recovered from the disease in the province, he added.

According to Jhagra, the province is seeking to expand its testing capabilities even more and is currently examining ‘pool testing’ as a means of availing from tests from the limited kits available in Pakistan.

The Balochistan Health Department, via Twitter, reported that of the 212 cases in the province, 141 had been found in returning pilgrims from Iran. Of the remaining patients, 52 were reported from provincial capital Quetta, 11 from Chaghai district; 1 from Khuzdar; 1 from Harnai; and 6 from Loralai.

The provincial authorities on Wednesday ordered the closure of out-patient departments in all hospitals due to the ongoing lockdowns and the coronavirus outbreak. “Only casualty and trauma center are functioning with limited staff,” the Health Department said.

The Islamabad Capital Territory reported 19 news cases on Thursday morning, according to the Government of Pakistan’s official COVID-19 portal, raising its tally to 102. Similarly, two more cases have been recorded in Gilgit-Baltistan, raising its overall tally to 213.

Gilgit-Baltistan’s Information Minister Shams Mir has said the government would impose a curfew from 11 p.m. to 3 p.m. on Thursdays and Fridays to encourage social distancing and reduce the spread of the coronavirus. He told journalists the government would take care of the impoverished, adding that the spread of the disease had taken a “dangerous turn” across all of Pakistan.

Globally, the virus has now infected more than 1,519,300 people, with over 88,500 reported deaths. Governments across the world have halted flights, locked down towns and cities and urged people to stay at home. Overall, around 330,600 patients of the 1.5 million+ infected have recovered thus far.