Pakistan on Friday recorded 75 new deaths due to the novel coronavirus, raising overall casualties to 5,058, as the government hailed a reduction in daily new infections of COVID-19.

Prime Minister Imran Khan, while inaugurating a new 250-bed hospital in Islamabad on Thursday, urged citizens to celebrate the upcoming Eidul Azha with “simplicity,” warning that if people showed carelessness, there was a great risk of the virus resurging.

Nationwide, 23,255 tests were conducted in the past 24 hours, and 2,751 new infections diagnosed—a positivity ratio of 11.8 percent. Health experts continue to warn that the country is still testing far below its claimed capacity of 71,780—and significantly below the numbers proposed by global health experts—and is likely only recording the most symptomatic patients while ignoring the spread among asymptomatic carriers. The government has dismissed these concerns, claiming Pakistan’s “comparatively low” death toll proves it’s policies are working.

Provincial Health Minister Dr. Yasmin Rashid on Thursday claimed that the coronavirus had “peaked” in the province in June, adding that new infections were now on a continuous decline. She said the government would continue to lock down viral hotspots, and urged people to adopt preventative measures or risk a second wave of the virus.

On Friday, authorities reported 17 new deaths due to COVID-19, raising total fatalities to 1,972. The province also reported 674 new infections, raising confirmed cases to 85,261, against 52,641 recoveries. There are now 30,648 active cases of the virus in Punjab province.

The province has crossed 100,000 confirmed cases of the coronavirus—the first region in Pakistan to do so. Meanwhile, Chief Secretary Mumtaz Ali Shah on Thursday issued directions to all deputy commissioners in the province to launch ‘Wear a Mask’ awareness campaigns in their respective districts to encourage mass adoption of the preventative measure.

Chief Minister Mahmood Khan on Thursday said the provincial government was trying to use the challenges posed by the coronavirus pandemic to strengthen its health infrastructure. He reiterated the PTI government’s stance that lives must be protected alongside livelihoods, adding that the steps being taken by the government were in the larger interest of the common man.

The provincial government on Friday reported 9 new deaths, raising its death toll to 1,063. In the past 24 hours, its recoveries rose to 19,503, while its confirmed cases have increased by 354 to 29,406. There are currently 8,840 active cases of coronavirus in the province. 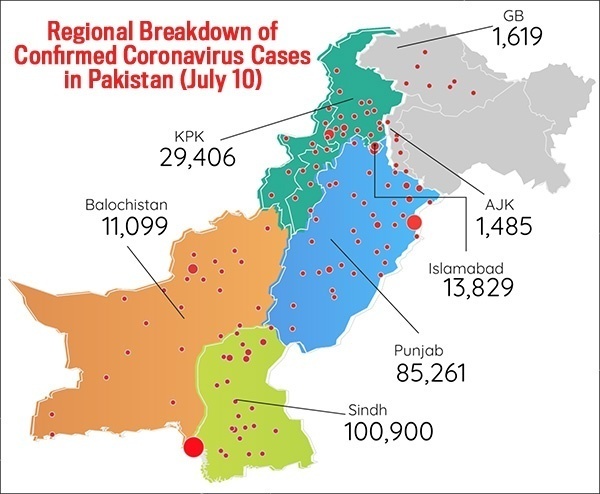 Chief Minister Jam Kamal Khan has announced that the provincial government would issue certificates of appreciation for volunteers working to contain COVID-19 to encourage their efforts.

Confirmed cases of the novel coronavirus in the province on Friday rose by 47 to 11,099. Overall, 125 people have died and 6,931 patients have fully recovered from the virus, leaving 4,043 active cases of COVID-19.

Islamabad on Friday raised its confirmed coronavirus cases by 98 to 13,829. There were 4 deaths in the past 24 hours, while 301 more people have fully recovered. Overall, 146 people have died due to COVID-19 in the federal capital against 10,240 recoveries, leaving 3,443 active cases of COVID-19.

Confirmed cases of the novel coronavirus in Gilgit-Baltistan rose by 14 on Friday to 1,619. The region reported 3 new deaths, raising toll to 34, while its recoveries have increased by 18 to 1,290, leaving 295 active cases.

In Pakistan-administered Kashmir, confirmed cases have increased by 26 to 1,485. There was 1 new death and 32 recoveries in the past 24 hours, leaving 41 fatalities and 860 fully recovered. It has 584 active cases of COVID-19.

Globally, the virus has now infected more than 12,390,734 people, with over 557,416 reported deaths. Governments across the word halted flights, locked down towns and cities and urged people to stay at home at the peak of the virus’s spread, but there are now signs of easements in nations that have reined it in to help shuttered economies recover. Overall, around 7,221,101 patients of the 12.3 million+ infected have recovered thus far.