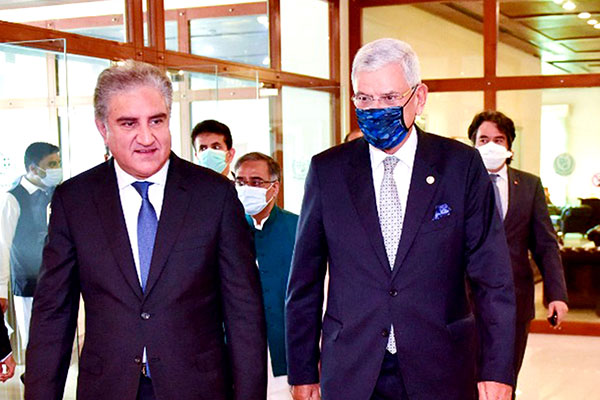 Pakistan has set a “good example” for the world on how to deal with the coronavirus pandemic, United Nations General Assembly President-elect Volkan Bozkir said on Monday.

“It [Pakistan] has performed better than any other country in dealing with the global pandemic and I am happy to observe it also with my own eyes,” he said during a joint press conference with Foreign Minister Shah Mahmood Qureshi in Islamabad. He said that he had also met Prime Minister Imran Khan and been “impressed” by him.

“He is a well-known political figure around the world and has a clear vision for the region, for world peace and security, along with important issues the world is dealing with, such as climate change,” he said, and referred to Qureshi as a “brother” who was doing an “excellent” job.

“I would like to extend my condolences over the Balochistan blast [in Chaman] to the people of Pakistan. My visit to this brotherly country is to recognize the longstanding brotherly relations Turkey and Pakistan have,” the Turkish national added.

In his address, the foreign minister said he had raised the issue of human rights violations in India-held Kashmir with the UNGA president-elect. “We had a very good discussion on that [Kashmir], the evolving situation, the military siege that has been going on for more than a year now, the human rights violations and the ceasefire violations,” he said, adding Pakistan was grateful that the U.N. Security Council had deliberated on the dispute three times in the past year. “Pakistan desires that the discussion on the issue is also held in the UNGA as it is the pulse of the world that highlights the views of the comity of nations,” he added.

Qureshi said he and Bozkir had also discussed the situation in Afghanistan, including the decision of Kabul to free 400 Taliban prisoners over the weekend.

Separately, the UNGA president-elect also called on the prime minister, with Khan urging the U.N. to play its role in addressing the situation in India-held Kashmir.

The UNGA president-elect had arrived in Islamabad on Sunday for a two-day visit that had been postponed last month over “technical flight problems.” He is the first Turkish national to ever be elected to the office of the President of the UNGA and would lead the 75th General Assembly Session of the global body later this year.