Nationwide active cases have reduced to 103,722 while recoveries have climbed to 113,623, a full 51.2 percent of confirmed cases

Coronavirus patients who have fully recovered in Pakistan on Friday surpassed the active cases of the deadly virus following the government’s adoption of revised guidelines for declaring patients COVID-free.

Authorities in Punjab have claimed this is partly to blame for the reduced testing in the province, although global health experts have advised the government to start randomized testing to ascertain the true spread of the disease. The country continues to test far below its claimed capacity of 71,780—and significantly below the numbers proposed by global health experts—having reported 4,087 new infections in the past 24 hours after conducting 22,941 tests, a positivity ratio of 17.8 percent. According to the World Health Organization, any country with a positivity ratio over 5 percent is likely only testing the most symptomatic patients and ignoring asymptomatic infections, which can significantly boost the invisible spread of the virus. 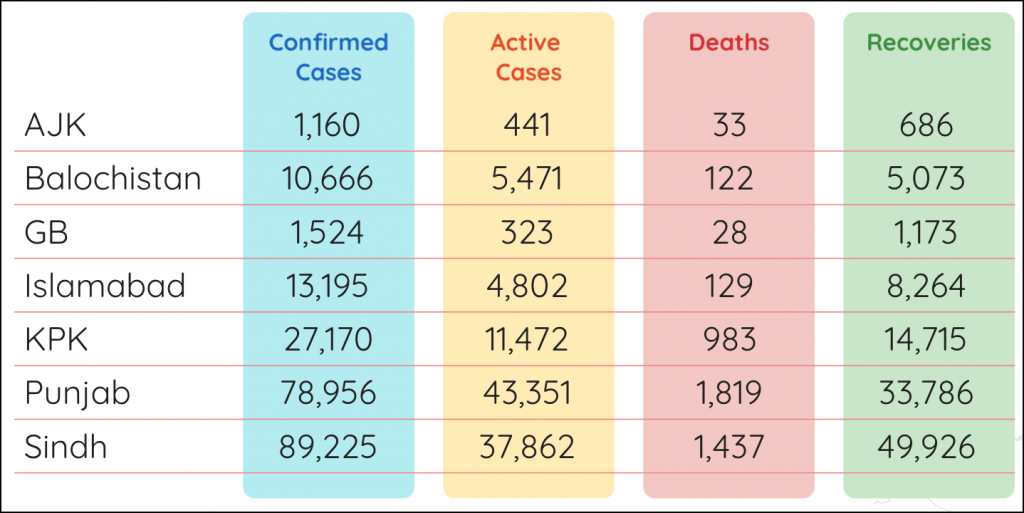 The province reported nearly half of all the recoveries recorded in the past 24 hours, as it has abandoned resting for any COVID-19 patients who aren’t elderly, have compromised immunities, or live in crowded conditions.

The provincial government on Thursday announced that three policemen who had contracted COVID-19 had succumbed to the disease, raising to 16 the police officials of the province who have thus far lost their lives. Of these, 14 were from Karachi.

Adviser to the C.M. on Information Ajmal Wazir on Thursday announced lockdown had been lifted from 89 areas after a reduction in new infections of COVID-19 in the affected regions. He said 805,877 people were currently confined to their homes due to the “smart lockdown.” 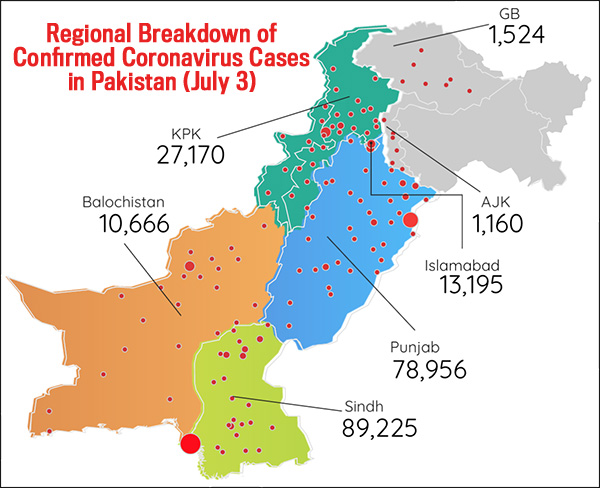 Islamabad on Friday raised its confirmed coronavirus cases by 113 to 13,195. There were no new deaths in the past 24 hours, while 414 more people have fully recovered. Overall, 129 people have died due to COVID-19 in the federal capital against 8,264 recoveries, leaving 4,802 active cases of COVID-19.

Confirmed cases of the novel coronavirus in Gilgit-Baltistan rose by 13 on Friday to 1,524. The region reported no new deaths, sustaining fatalities to 28, while its recoveries have increased by 27 to 1,173, leaving 323 active cases.

In Pakistan-administered Kashmir, confirmed cases have increased by 25 to 1,160. The region’s death toll increased by 1 to 33, while 686 people have now fully recovered. It has 441 active cases of COVID-19.

Globally, the virus has now infected more than 10,991,870 people, with over 524,175 reported deaths. Governments across the world halted flights, locked down towns and cities and urged people to stay at home at the peak of the virus’s spread, but there are now signs of easements in nations that have reined it in to help shuttered economies recover. Overall, around 6,150,600 patients of the 10.9 million+ infected have recovered thus far.