Pakistan on Wednesday reported that the number of confirmed novel coronavirus cases in Pakistan had hit 14,885, with 3,425 recoveries and 327 deaths, leaving 11,133 active cases.

According to the National Institute of Health’s daily brief, the government recorded 192 new recoveries and 806 new infections in the past 24 hours. The massive spike comes as all regions except Sindh have reduced testing in recent days, raising serious concerns about the government’s claims of having increased the country’s testing capacity. Overall, only 8,688 tests were administered in the past 24 hours, with Sindh province accounting for nearly half of those. Punjab, despite possessing more than 50 percent of the country’s population, is lagging dangerously behind, having conducted less 2,500 tests in the past 24 hours.

Special Assistant to the P.M. on Health Dr. Zafar Mirza has claimed that the reduced testing might be attributable to a reduced number of suspects. This is patently false. Punjab’s Secondary Health Department has noted that over 1,000 suspected patients are still awaiting tests—and the number is rising daily. In the absence of more aggressive testing, there is no way to determine how many of them could be carriers.

The country’s most populous province recorded 187 new infections in the past 24 hours, raising its total confirmed COVID-19 cases to 5,827. Punjab has also reported 9 new deaths, bringing its casualty count to 100, the second-highest provincial toll in Pakistan.

Overall, the province has reported 1,427 recoveries, leaving 4,300 active cases, 57 more than a day earlier. Provincial capital Lahore continues to report the most cases, 1,408, against just 296 in Rawalpindi, which has the second highest number of infections in the province.

Punjab conducted slightly under 2,500 tests in the past 24 hours, a far cry from the provincial government’s claims it has the capacity to test more than 3,500/day.

The Sindh government on Tuesday banned all religious activities during Ramzan, including processions and majalis, in a bid to curb the spread of COVID-19. Sindh is also the only province to have resumed restrictions on mosques amid the rapid spread of COVID-19, despite the federal government continuing to support their reopening. 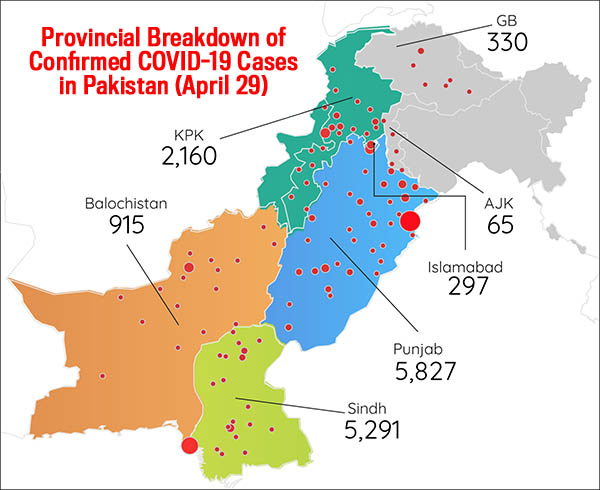 The province with the highest death toll reported 10 more casualties on Tuesday night, raising the total lives lost to COVID-19 to 114. Overall, the province has now reached 2,160 confirmed cases of the novel coronavirus, with 562 recoveries. It currently has 1,484, 137 more than 24 hours ago.

Health and Finance Minister Taimur Jhagra last week claimed the province has a testing capacity of 1,500/day. However, much like Punjab, it has slowed its testing in recent days, having conducted less than 1,000 tests per day for the past 3 days.

Overall, the province has now reported 915 confirmed cases of the novel coronavirus, with 14 deaths and 176 recoveries. It currently has 725 active cases, 62 more than 24 hours earlier. Per the Balochistan Health Department, the majority of the new cases are of local transmission.

The province did not report any new deaths in the past 24 hours, nor did it report any recoveries, raising concerns that if cases continue to spread, its healthcare infrastructure would soon be overburdened.

Islamabad on Wednesday morning raised its confirmed COVID-19 infections to 297, with no new deaths or recoveries. Overall, Islamabad has thus far reported 4 deaths and 36 recoveries, leaving 257 active cases, 36 more than a day earlier.

In Gilgit-Baltistan, cases of the novel coronavirus rose to 330, with no new deaths and 2 new recoveries. Overall, 3 deaths have been reported from the region and 224 recoveries, leaving 103 active cases, 8 more than a day earlier.

Pakistan-administered Kashmir has reported no new infections, or deaths in the past 24 hours, but has raised its recovery rate to 37. Overall, its active cases now stand at 28 active cases, 2 less than a day earlier.

Globally, the virus has now infected more than 3,138,880 people, with over 218,010 reported deaths. Governments across the world have halted flights, locked down towns and cities and urged people to stay at home, but there are signs of easements to help shuttered economies recover. Overall, around 956,050 patients of the 3.1 million+ infected have recovered thus far.