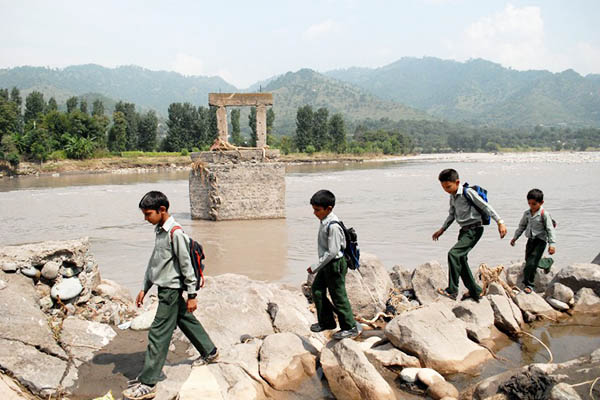 Experts differ on whether building more reservoirs and dams will help reduce flooding in Pakistan.

Energy-starved Pakistan relies on a multitude of dams and barrages to prevent Himalayan rivers from flooding and help meet its power needs, but their failure to prevent disaster four years running is making some experts question their utility.

Every year since 2010, which saw the worst floods in Pakistan’s history, the country has experienced catastrophic inundations that kill hundreds and wipe out millions of acres of prime farmland, harming the heavily agrarian economy.

Starting when the country was still a part of British-ruled India, engineers embarked upon ambitious projects to harness the water that flows from Kashmir through the length of the country to the Arabian Sea. Today Pakistan is home to the biggest earth-filled dam in the world at Tarbela, just north of Islamabad, and more than 150 others classed as “large.”

With more than 30 percent of its power coming from hydroelectric sources, such structures are also crucial to help alleviate a chronic energy crisis which has put a brake on industrial productivity. But a campaign for non-structural measures to contain flooding is gradually gaining ground—with proponents arguing that man-made interventions can, counter-intuitively, exacerbate the floods.

There are two major arguments—the build up of sediment in a dam shortens its useful lifespan, while the slowing of rivers due to structures mean that silt accumulates, decreasing their capacity.

Kaisar Bengali, a career technocrat who advises the chief minister of Balochistan province, said: “Dams create floods, dams don’t prevent floods. When the floods occur, if you have a storage area you can store the water in that area. Dams have a reservoir so they create a lake. Barrages divert the water into canals. They don’t have a reservoir. But they don’t just block water, they block silt as well and as a result the riverbed rises. So in 2010 the water that passed through the Indus was less that in 1976 yet it created more flooding because the river had risen 6-7 feet.”

A 2000 research paper commission by conservation group WWF that looked at various countries warned of similar consequences and further noted the drainage of wetlands as well as deforestation associated with dams led to a loss of natural sponges. Decisions on whether to release water are also subject to opposing concerns—dam managers may seek to keep reservoirs full for energy generation, whereas an early release could lessen flood impacts.

Mushtaq Gaadi, a water activist and academic at Islamabad’s Quaid-e-Azam university, noted that some of this year’s worst flooding occurred in the Chenab river, where a key structure has lost significant discharge capacity due to the build-up of sediment. “The most important and critical infrastructure at Chenab is Trimmu [barrage] which was constructed during the British era. Its discharge capacity has been drastically reduced. It was not capable of discharging more than 600,000 cusecs. Mainly due to the rising of the river bed level,” due to silting.

Dams and barrages are difficult and expensive to de-silt and maintain, forcing Pakistan to turn to help from multilateral lending agencies such as the World Bank and Asian Development Bank.  With the World Bank’s aid, Pakistan completed its renovation of the Taunsa barrage in central Punjab province in early 2010 at a cost of $144 million—only to see an embankment upstream of the structure catastrophically fail when the floods came in August.

This year, Pakistan was again forced to blow up protective dykes to divert flood waters away from cities to less-densely populated areas, which Gaadi said was another sign of a failing strategy.

Beyond their disposition to fail, dams are also responsible for luring people into harm’s way by creating a false sense of security in areas that are naturally fertile flood zones. Many of 2014’s almost 300 deaths could have been prevented had villagers not been living in such areas, said Gaadi.

Despite the noted shortcomings, the government believes that more, not fewer dams are the solution, and has vowed to press ahead with new projects—such as the Diamer-Bhasha Dam in northern Gilgit Baltistan, projected to cost some $14 billion.

Shafiq-ur-Rehman, an environmental sciences professor at the University of Peshawar, said it showed a lack of long-term planning. “First we build dykes and spend millions of rupees on them and then we blow them up and drown people to save cities or other areas,” he said.