Overall testing continues to drop, with the government having only conducted 21,033 tests in the past 24 hours

Pakistan conducted just 21,033 tests for the novel coronavirus in the 24 hours preceding Saturday morning—it’s lowest testing since June 3 for a third consecutive day—against 3,138 new infections, a positivity ratio of 14.9 percent.

Nationwide, daily spikes in confirmed cases of COVID-19 have not dropped below 3,000 since May 31. However, medical experts warn that the country’s positivity ratio still remains too high According to the World Health Organization, any country with a positivity ratio over 5 percent is likely only testing the most symptomatic patients and ignoring asymptomatic infections, which can significantly boost the spread of the virus.

The provincial government has decided to allow cattle markets for Eidul Azha outside city limits, and has established a nine-member committee headed by the provincial law minister to oversee SOPs to curb the spread of coronavirus. According to a statement, cattle-owners and customers would be fined if any SOP violations were witnessed.

On Saturday, authorities reported 27 new deaths due to COVID-19, raising total fatalities to 1,656. The province also reported 893 new infections, raising confirmed cases to 72,880, against 21,340 recoveries. There are now 49,884 active cases of the virus in Punjab province, 535 more than a day earlier.

In his daily briefing, Chief Minister Murad Ali Shah said the province had conducted 5,103 coronavirus tests and recorded 1,150 new coronavirus cases—a positivity ratio of 22 percent. He urged the public to help the government bring this ratio down by adopting standard operating procedures issued by medical experts, the government and the World Health Organization.

Chief Minister Mahmood Khan on Friday said the provincial government was working to provide maximum relief to all citizens that had been impacted by COVID-19. He told a delegation of the Khyber-Pakhtunkhwa Bar Council that the government is focused on containing the pandemic by allowing the continuation of livelihoods while saving lives. 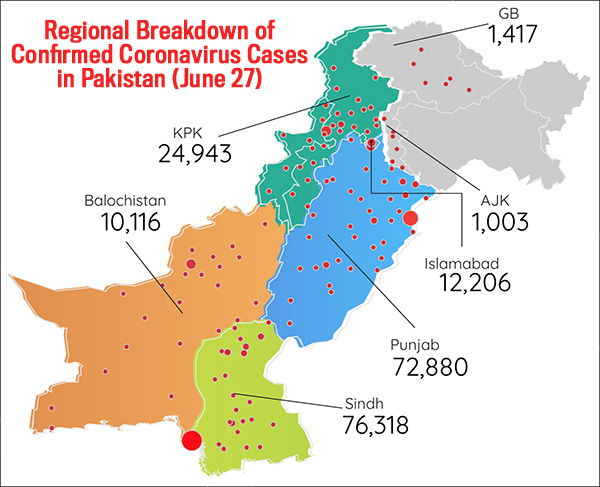 A Balochistan lawmaker tested positive for the coronavirus on Friday—while he was attending the ongoing budget session of the Balochistan Assembly. Mitha Khan left the premises after his test results were revealed but he might have inadvertently exposed dozens of lawmakers. The premises were subsequently disinfected for future sessions.

Confirmed cases of the novel coronavirus in the province on Saturday rose by 170 to 10,116, with 4 new deaths raising total fatalities to 113. Overall, 3,768 patients have recovered from the virus, leaving 6,235 active cases of COVID-19.

Confirmed cases of the novel coronavirus in Gilgit-Baltistan rose by 19 on Saturday to 1,417. Overall, the region has thus far reported 23 deaths and 1,027 recoveries, leaving 367 active cases.

In Pakistan-administered Kashmir, confirmed cases have increased by 41 to 1,003. The region reported 3 new deaths in the past 24 hours, raising death toll to 25 against 446 recoveries. It has 529 active cases of COVID-19.

Globally, the virus has now infected more than 9,910,005 people, with over 496,991 reported deaths. Governments across the world halted flights, locked down towns and cities and urged people to stay at home at the peak of the virus’s spread, but there are now signs of easements in nations that have reined it in to help shuttered economies recover. Overall, around 5,360,798 patients of the 9.9 million+ infected have recovered thus far.