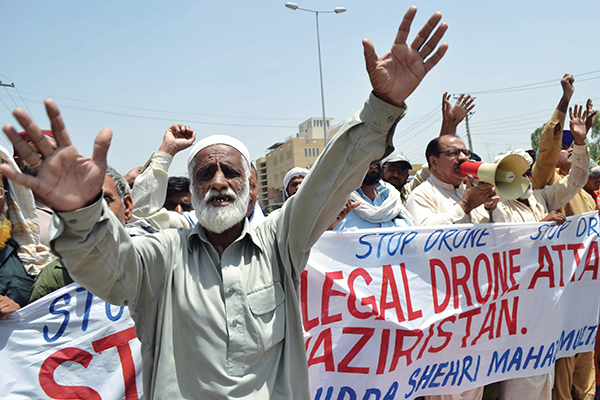 At a delicate time of transition, another U.S. strike.

On May 29, less than a week after U.S. President Barack Obama pledged to make the drone program more transparent and provided new guidelines for its use, six men, including a senior Taliban leader, were killed in a suspected drone strike in Pakistan’s federally-administered tribal areas. For the incoming government of Prime Minister-elect Nawaz Sharif, it couldn’t have come at a worse time.

Sharif, the leader of the Pakistan Muslim League (Nawaz), has been a vocal critic of the drone program. Both he and cricketer turned politician Imran Khan, whose Pakistan Tehreek-e-Insaf party has formed the provincial government in the Khyber-Pakhtunkhwa province along the tribal belt, campaigned on promises to end the drone strikes, describing them as a violation of Pakistan’s sovereignty. Khan even went so far as to promise his supporters that if elected prime minister, he would order Pakistan’s Air Force to shoot down any drones that entered the country’s airspace.

Sharif offered less vitriol, but echoed the same rhetoric. “Drones indeed are challenging our sovereignty,” he told journalists after the May 11 elections. “I think this is a very serious issue, and our concern must be understood properly.” This vague stance might allow Sharif to tacitly support drone strikes, while publicly condemning them like his predecessors in the former government. This most recent drone strike makes that harder, says Talat Masood, a defense analyst, but not impossible. “He will have to emphasize more forcefully that drones are a violation,” he tells Newsweek.

“The previous system will stay in place,” agrees independent analyst Hasan-Askari Rizvi. “There will be more engagements on a diplomatic level, and there will definitely be more lip service, but there will be no real change in the government’s response.”

The identity of the Taliban leader reportedly killed in the drone strike—Wali-ur-Rehman—is another mixed blessing. Rehman was the second-in-command of the Pakistani Taliban, a homegrown militant group with ties to Al Qaeda and the Taliban in Afghanistan. The U.S. State Department had offered a $5 million bounty for information leading to his capture due to his status as “the Tehreek-e-Taliban Pakistan’s chief military strategist” and the fact that he allegedly spearheaded several attacks on U.S., NATO, and Pakistani forces on both sides of the Pakistan-Afghanistan border. Removing him from the board is a significant achievement. But it comes with a price.

The Pakistani Taliban has no shortage of candidates for the second- or even third-in-command positions. While Rehman was a major player, he can be quickly replaced. In fact, less than a day after the drone strike, there were already reports that a new second-in-command had stepped up. Could this cause the incoming Pakistani government to rethink its plans to negotiate a peace treaty with the Taliban? “It’s possible, but unlikely,” says Rizvi. “The Pakistani Taliban might demand some kind of guarantee that drone attacks will end if they stop their militancy, but apart from that, the peace process will continue.” Not so, according to the Taliban. “Our attacks in Pakistan will continue,” TTP spokesman Ihsanullah Ihsan told journalists after the drone strike, accusing Islamabad of aiding the U.S.

Not that a treaty was ever a guarantee. The Pakistani Taliban had asked Sharif, while he was in the opposition, to serve as guarantor of any negotiation. But they also warned that if his government were perceived as acting in an “un-Islamic manner,” it would also be targeted. The militants might also be unwilling to work with the interlocutor suggested by the new government to lead the talks.

Without the Pakistani government knowing whom to talk to—the Pakistani Taliban are a heavily fractured group with no clear central leadership—it is unclear how effective any negotiations may be. This has not stopped Pakistanis from demanding to know why the drone strike occurred at such a crucial time for the country’s democratic process.

The U.S.’s refusal to accept responsibility for the attack isn’t helping.

White House spokesman Jay Carney said he had no information on whether Washington had targeted Rehman, although he added, “If those reports were true, or prove to be true, it’s worth noting that his demise would deprive the [Pakistani Taliban] of its second-in-command and chief military strategist.”

Just last month Obama announced that lethal force would be used only to “prevent or stop attacks against U.S. persons” and only if a target posed a “continuing, imminent threat” to Americans. Washington’s secrecy in light of this statement—despite Carney stating that the rules of engagement were separate for the “Afghan war theater”—could impact the Pakistani government’s confidence in dealing with Obama.

“Every Pakistani leader knows they need to work with the U.S.,” says Rizvi. “If the drone attacks continue to net results, and minimize civilian casualties, there shouldn’t be a problem.” Masood agrees, saying this was the rare attack that matched the guidelines laid down by Obama. “I think Pakistan should thank the U.S. for this.”

After Obama’s much-anticipated speech on the controversial drone program at the National Defense University in Washington, D.C., Pakistan’s foreign ministry had cautiously welcomed his new guidelines, but made it clear that they were still considered a violation of Islamabad’s sovereignty.

“The government of Pakistan has consistently maintained that the drone strikes are counterproductive, entail loss of innocent civilian lives, have human-rights and humanitarian implications, and violate the principles of national sovereignty, territorial integrity, and international law,” it said in a statement.

After the May 29 drone strike, it issued another statement expressing “serious concerns” over the latest incident. If Islamabad and Washington don’t learn to collaborate on drone strikes within Pakistan, those concerns could become a lot more serious.