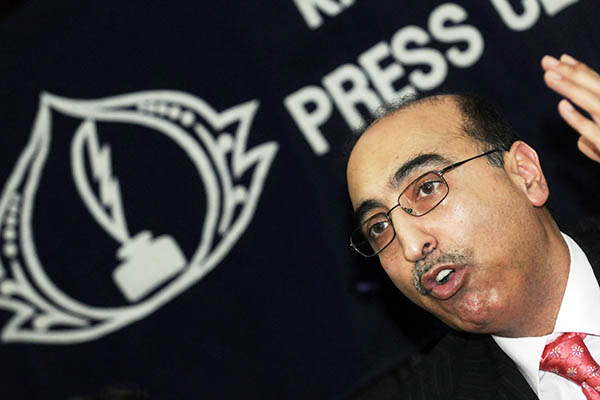 The Indian election frontrunner has said he will pursue cooperation with foreign governments.

Pakistan said Wednesday it was “encouraged” by comments from India’s election frontrunner Narendra Modi, who has stressed cooperation with foreign governments if he was elected prime minister.

Hindu nationalist hardliner Modi and his opposition Bharatiya Janata Party (BJP) are expected to vault to power at mammoth elections underway in India after a decade of center-left Congress party rule. Critics fear Modi will adopt a tough foreign policy that could see relations deteriorate with Pakistan and neighboring China.

But Pakistan High Commissioner Abdul Basit said he welcomed Modi’s comments in a television interview late Tuesday that he would pursue the policies followed by former BJP premier Atal Behari Vajpayee. “I was very much encouraged. They were very positive. It gives us hope that if he is elected as prime minister we should expect more positive things,” Basit told a small gathering of journalists in New Delhi.

Vajpayee sought several times during his tenure to make permanent peace with Pakistan, which has fought three wars with India, two of them over Kashmir, since their split in 1947. The nuclear-armed neighbors both clashed in a limited conflict called the Kargil war in 1999, and the disputed region of Kashmir, which both countries claim in full, continues to be a running source of tension.

New Delhi broke off peace talks with Islamabad after the 2008 Mumbai attacks in which 166 people were killed.

Making a strong pitch for a resumption of the talks, Basit said dialogue was the only way to resolve outstanding issues such as Kashmir. He said the Pakistani government wished to change the “narrative” between the two countries into one of “cooperation and trust.”

The Pakistani envoy also said that his government was “keenly looking forward to a government with which Pakistan [can engage] quickly, comprehensively and meaningfully … and move from conflicting relations.” The envoy added that “terrorism is a common enemy of both countries” and that those who believed Pakistan harbored terrorists “misunderstood the country.”

Asked about foreign policy in the TV interview on Tuesday night, Modi asserted that he would follow Vajpayee’s policies. “I believe mutual respect for one another and cooperation should be the basis for relationships with foreign nations,” Modi said, according to the Press Trust of India news agency.

India’s six-week long elections will end on May 12 with results four days later.