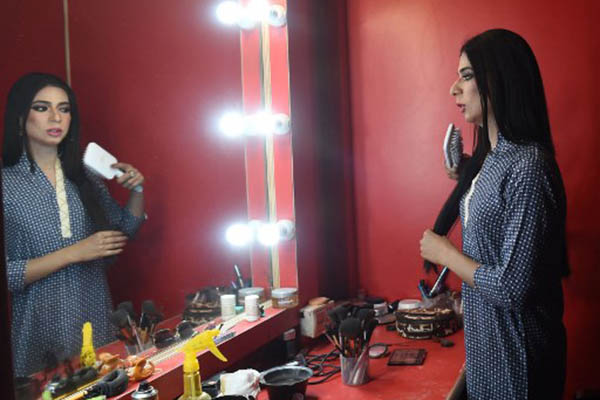 A Pakistani TV channel has put the country’s first transgender news anchor on the air, a watershed cultural moment for the marginalized community in the country.

Marvia Malik, a former model who appeared on the Lahore-based private broadcaster Kohenoor for the first time last Friday, told AFP she has received “unprecedented love and support” since landing the job. “My family never accepted or owned me,” she said, adding that the rift drove her to seek a better future in Lahore. “Here I received unprecedented love and support from everyone that I never got from my own family,” she said, adding that the positive response only escalated once she went on air for the daily broadcast.

Transgenders—also known in Pakistan as “khawajasiras,” an umbrella term denoting a third sex that includes transsexuals, transvestites and eunuchs—have long fought for their rights in the Islamic country.

In 2009 Pakistan became one of the first countries in the world to legally recognize a third sex. Last year the first transgender passport was issued, while several have also run in elections. But they live daily as pariahs, often reduced to begging and prostitution, subjected to extortion and discrimination or targeted for violence.

Malik, who declined to confirm her age to AFP but is reportedly around 21, said she hoped to use her platform to urge people to treat one another as human beings first, without discrimination. A journalism graduate from Punjab University, she said she hopes eventually to enter politics herself or form a non-governmental organization aimed at promoting gender rights.

If she becomes “financially sound,” she added, she might even seek to establish her own TV channel.

Many transgenders in Pakistan earn their living as dancers at weddings or parties and, sometimes, in more clandestine ways. Her employers at Kohenoor admitted that Malik had stunned them while interviewing for the job by turning a question around on them.

“She asked, ‘Would you want to see me a beggar, a sex worker or dancing at the cultural festivals, or give me a respectable job in your channel?’” news director Bilal Ashraf told AFP. “Her question stunned us really, and we had no reply.”

It forced them to “devise a policy to welcome, accept and own everyone in our channel without any discrimination,” he said, adding: “We don’t bother with where our channel will stand in the ratings by doing this.”

So far the response has been positive, with Pakistanis widely heralding the move on social media. But transgenders remain targets. Late Tuesday a transgender was shot dead along with a friend in Peshawar, police told AFP.

Farzana Riaz, head of rights group TransAction, said 55 transgenders have been murdered during the past five years. “We want protection from government from this continued persecution,” she said.