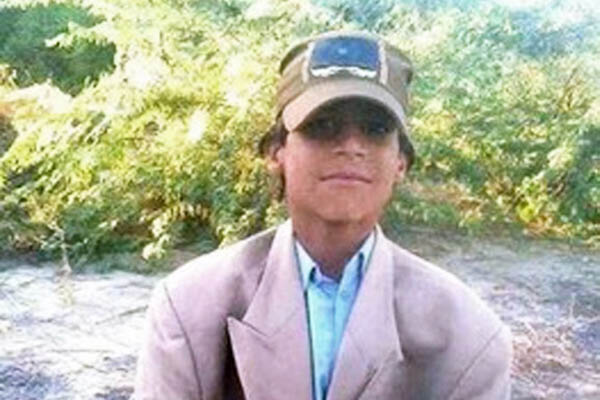 Chakar Baloch was found dead three days after he was abducted from near his home. HO—AFP

While Islamabad’s war against the Taliban inspires much debate, many ignore the insurgency in Balochistan.

At 10-years-old, Chakar Baloch had a whole life to look forward to when unknown men kidnapped him near a market in Balochistan province. Three days later his body was found in a stream, making him another victim of the shadowy fight in the desolate, unstable province.

In Chakar’s family they no longer count the men kidnapped, detained, tortured or beaten for their part in a long-running nationalist movement in the province. Chakar’s cousin and grandfather were detained then released in October, then it was another cousin, Sanaullah, who was taken. He has not been seen since, according to his family. Feeling threatened, the family left their home in the remote district of Panjgur to seek refuge in Turbat, a separatist stronghold around 200 kilometers south.

Late in the afternoon of Jan. 7, Chakar was playing in a lane when according to his family a group of men, some in uniform and some in civilian clothes, snatched him and fled by motorbike. The family complained to the police but nothing happened. Three days later the messy-haired boy was fished out of a nearby river, his slight body hit with at least two bullet wounds, according to photos seen by AFP.

“He was a lovely child. He loved playing football, cricket and video games like other boys his age,” a member of his family said, speaking on condition of anonymity. “I believe that he was killed due to the political activity of the whole family. They wanted to give the message to the family, ‘See what we can do to you—if we cannot catch the elders then we will hit the children.’”

The Pakistani authorities insist the family is wrong and Chakar was killed by Baloch separatist militants who tried to pin the blame on security forces when they realized they had killed a child.

Clashes in the northwest between the Taliban and the Army attract passionate debate every day, unlike the fighting in Balochistan, which has pitched separatists against state forces for a decade. The idea of giving greater autonomy to the province is highly sensitive in Pakistan, a country still scarred by the independence in 1971 of its eastern portion, now Bangladesh. Balochistan, spread over an unforgiving landscape of mountains and deserts abutting Iran and Afghanistan, is rich in gas and mineral deposits—adding a financial dimension to the battle.

In recent years many people suspected of links to separatist groups have mysteriously disappeared, allegedly at the hands of the intelligence agencies, and never been seen again. “Thousands of people are missing in Baluchistan, we have a list of 2,850 cases of missing persons,” said Nasrullah Baloch, the chairman of the Voice of Baloch Missing Persons (VBMP). “Most of them are political activists and their family. When they don’t find the political activists they pick up the relatives, the family members of these activists.”

The authorities dispute the figures given by the Baloch campaigners, putting the number of missing at less than 100. Sometimes they reappear after months or years in detention. Or dead, their bodies left by a road or in a riverbed, a strategy dubbed “kill and dump.”

Tahir Hussain Khan, the head of the Balochistan section of the independent Human Rights Commission of Pakistan, said 460 bodies have been found up to now, most of them political activists.

The rebels attack trains, gas installations, security forces and Punjabis, the ethnic group from Pakistan’s richest and most populous province they accuse of “colonizing” Baluchistan. They also threaten local media when they fail to publish their statements.

Prime Minister Nawaz Sharif, elected in May last year, has tried in recent months to negotiate with the Pakistani Taliban to end their bloody seven-year insurgency. He has also put a former rebel, Abdul Malik Baloch, in charge of Balochistan as chief minister, in the hope of building bridges with the rebels.

“I am trying to convince the insurgents that you should come to the table and talk,” said chief minister Baloch, adding that past insurgencies in the province had been ended through negotiations. “I think it will be better for the Baloch and Balochistan that we should go for a dialogue bringing together insurgents and tribes, this is the only solution.” According to a government source, preliminary contacts have been established with the disparate half dozen groups that make up the separatist movement.

Part of the sensitivity around Balochistan among Pakistani officials stems from their belief that the insurgent movement is funded by India as part of efforts to destabilize the country. The officials also complain that European countries such as Britain and Switzerland, where some of the group leaders are based, do not do enough to stop their activities.

“The people used to call these separatists naraz (angry) Baloch, I call them terrorists, and Europe is the high road for terrorists,” said Balochistan home minister Sarfaraz Bugti. “What we think is that Indian government and Indian (intelligence) agency RAW is supporting these separatist groups.”

Ten years since the start of the current uprising, the Balochistan question remains unsolved and innocent youngsters like Chakar pay the ultimate price for the involvement of their relatives.

thanks from Balochistan for reporting this burning issue,, we have been suffering from last 6 decades , as the war imposed on us by so called islamic army of pakistan, millions have lost their lifes during this brutal and illegal occupation over balochistan , We want UN intervention ………….

negotiation is only the weapon to resolve the problen