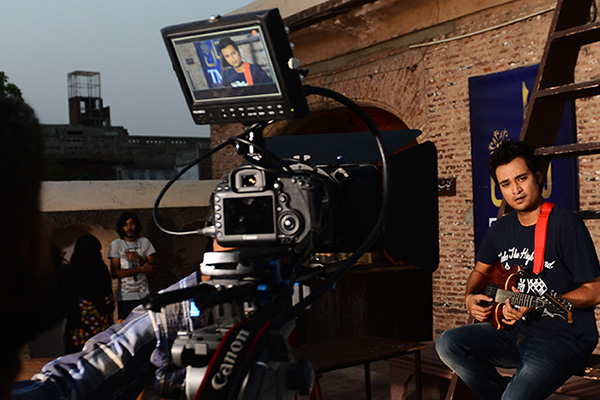 Like its smash hit forerunner, Taan follows the lives and loves of a group of young people who regularly burst into song. But this time they attend a music academy in Lahore, instead of an American high school.

Taan—which is a musical note in Urdu—tackles subjects considered off limits in Pakistan’s conservative Muslim society, with plotlines including love affairs between two men and between a Taliban extremist and a beautiful Christian girl.

The plan is for the 26-episode series to air in September or October, and while producer Nabeel Sarwar insisted the program was not a “political pulpit,” he is determined to take on the tough issues.

Taking a public stand to defend liberal values like this is rare in Pakistan, where forces of religious conservatism have risen steadily in recent years. Authorities routinely cut risqué scenes in foreign films, and the team behind Taan is acutely aware that it must tread carefully with the challenging material.

In one scene the two gay lovers dance and sing in a small room but never embrace—their relationship is suggested rather than overtly shown. The moment is interrupted when a radical Islamist character bursts in.

Director Samar Raza said representing the lives of gay characters was difficult in a country where homosexuality is still illegal. “Let’s say in a certain scene, there are two boys talking to each other, they are not allowed to show their physical attachment to each other,” he said. “So I bring a third character who says: ‘God designed Adam and Eve, not Adam and Steve.’”

It is not only the sensibilities of the censors the producers must navigate.

In a bid to appeal to older viewers the makers of Taan have licensed around 100 classic Pakistani songs, some by legendary artists such as Nusrat Fateh Ali Khan, and have reworked them to suit modern tastes, as Glee does.

“We try to find music that resonates with the older generation which control the access to the TV but we contemporize that music so that the younger audience does not feel left out,” Sarwar said.

The show hopes that by taking on difficult issues in a lighthearted way it will both reflect the changing nature of Pakistani society and attract a young audience currently hooked on imported Turkish soap operas.

Local dramas struggle to compete with the likes of Manahil and Khalil and Ishq-e-Mamnu—Turkish serials starring Westernized characters that have been dubbed into Urdu.

Turkish soaps are widely watched across the Muslim world, but the popularity of Ishq-e-Mamnu has prompted a lively debate about the “Turkish invasion” of the small screen in Pakistan, with local production companies complaining that they do not have the resources to rival them.