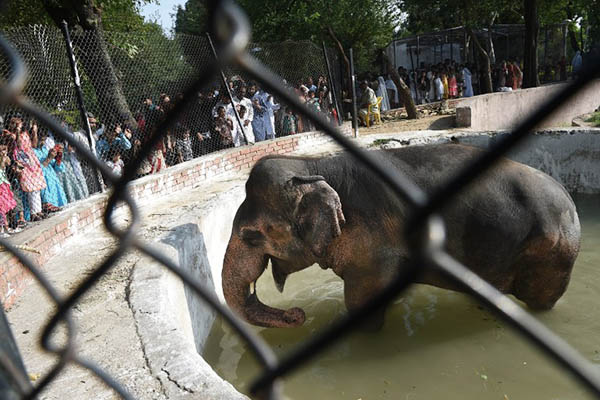 Recently unchained Kaavan is suffering a kind of ‘mental illness’ say experts and urge government to build a more suitable habitat for him.

The 32-year-old Asian elephant is suffering from “mental illness,” and without a better habitat his future is bleak even if a long-promised new mate finally arrives, experts told AFP.

Outrage over Kaavan’s treatment went global—with a petition garnering over 200,000 signatures—after it emerged he was being chained at the Islamabad Zoo in Pakistan’s leafy capital.

Zoo officials have said this is no longer the case, and that Kaavan just needs a new mate after his previous partner died in 2012. But his behavior—including signs of distress such as bobbing his head repeatedly—demonstrates “a kind of mental illness,” said Safwan Shahab Ahmad, the vice chairman of Pakistan Wildlife Foundation.

Ahmad, who has conducted detailed research on Kaavan since the 1990s, also slammed the lack of trained experts to care for the elephant, saying he needs more space and a pen better adapted to his natural forest habitat.

Activists say he has insufficient shelter from Islamabad’s searing summer temperatures, which can rise to above 40 degrees Celsius.

Asian elephants can roam thousands of kilometers through deep tropical and subtropical forests, according to the World Wildlife Fund. In contrast, Kaavan’s 90 by 140 meter pen has almost no foliage, and only limited shade is provided.

“Give Kaavan deep bushes and artificial showering and you will see him enjoying the environment,” said Ahmad, who has written several research papers on the elephant.

Ahmad was backed by mammalogy expert Dr. Wasim Ahmad Khan, who said captivity “will shorten his life if we don’t take care of his environment.”

Arriving as a one-year-old in 1985 from Sri Lanka, Kaavan was temporarily held in chains in 2002 because zookeepers were concerned about increasingly violent tendencies, but he was freed later that year after an outcry. His mate Saheli, who arrived also from Sri Lanka in 1990, died in 2012, and last year it emerged that Kaavan was regularly being chained once more—for several hours a day.

Scores of people signed a petition sent to zoo authorities and Prime Minister Nawaz Sharif in protest, and the zoo told AFP during a visit earlier this month that the elephant is no longer being restrained.

A second petition circulated earlier this year and backed by over 200,000 animal-lovers from across the globe, demanded Kaavan’s release to a sanctuary.

Cher, who for months has been speaking out about Kaavan’s plight, tweeted a series of images on June 29 showing Kaavan standing by an artificial pond, part of a new moat encircling his enclosure. “KAAVAN UNCHANED & WALKING TO WATER, WE ARE CLOSE TO SAVING HIM” the singer tweeted.

But the zoo, run by the Capital Development Authority (CDA), hit back at the accusations, saying Kaavan was just lonely and in need of a new mate. “It was in November last year that we unchained Kaavan after allocating a much bigger space for him in the zoo and developing necessary infrastructure for his free movements,” the CDA’s deputy director general Iftikhar Awan, who is responsible for the zoo, told AFP.

The zoo is in negotiations with Sri Lanka over a new mate for Kaavan, he added, though he could not give a timeline.

Pakistani media have also upped the pressure on zoo authorities after an ostrich died there in May. “We are waiting for a report that will disclose the reasons for ostrich’s death,” said the zoo’s deputy director Dr. Muhammad Bilal.

Kaavan’s keeper maintains that the pachyderm is not being mistreated but just longs for company. “Bring a female elephant and you will see very positive changes in Kaavan,” said keeper Jalal-ud-din Ahmad.