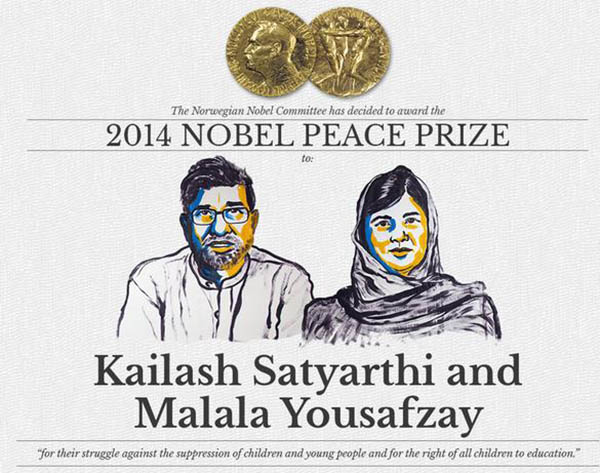 Yousafzai, at 17, is the youngest recipient of the prestigious award.

“The Norwegian Nobel Committee has decided that the Nobel Peace Prize for 2014 is to be awarded to Kailash Satyarthi and Malala Yousafzai for their struggle against the suppression of children and young people and for the right of all children to education,” the jury said. Announced by Thorbjorn Jagland, the committee’s chairman, the award includes a gold medal, a diploma and approximately $1.3 million in cash.

Meanwhile, Satyarthi has been commended for his “great personal courage” in leading peaceful demonstrations against the exploitation of children for financial gain. “Children must go to school and not be financially exploited,” the committee said. “In conflict-ridden areas in particular, the violation of children leads to the continuation of violence from generation to generation.”

In 2013, the Organization for the Prohibition of Chemical Weapons won the award, despite mass support for Yousafzai. “I would like to congratulate them on this much-deserved global recognition,” Yousafzai said at the time in addition to thanking her supporters.

At 17, Yousafzai is now the youngest recipient to ever receive the Nobel Peace Prize. She is the second Pakistani to win a Nobel Prize, with Abdus Salam sharing the 1979 Nobel Prize in Physics with Sheldon Lee Glashow and Steven Weinberg.

The Taliban shot Yousafzai in 2012 for championing girls’ right to an education. The men who targeted her were arrested in a joint operation between police and Pakistan’s armed forces in September—over two years after she was shot.

I hope this delayed but important recognition from the international community nudges the so called educated and socially conscious people especially in Pakistan the importance of education especially of women and self sacrifice for the sake of the global community.