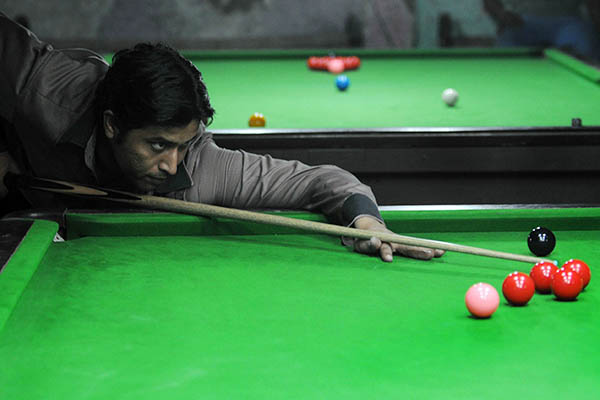 Snooker champion Mohammad Asif says he is ready to defend his title, has not received any money from the government.

Rising sports stars regularly spout the cliché about not letting success change them, but in the case of Mohammad Asif, Pakistan’s sole current world champion, it seems to be true.

The 31-year-old was given a hero’s welcome when he returned to Pakistan after winning the amateur world snooker championship a year ago, feted by politicians and media alike. But despite the celebratory mood from last year, he still lives in the same modest house in a nondescript corner of Faisalabad, an industrial city in Punjab province, and still practices at the same grubby basement club.

He says he has seen nothing of the $100,000 reward promised him by the government for his win, but his success has made him a superstar in the city once known as the “Manchester of Pakistan” for its countless cotton mills.

“Wherever I go, thanks be to God, I get special love from the people, everybody is caring and praying for me,” he said. “Now everyone in the city recognizes me, which gives me pleasure.”

The biggest change for Asif has been his wheels. Gone is his rickety old motorbike, replaced by a gleaming black Toyota Corolla emblazoned with “M. Asif—World Champion”—a gift from Pakistan’s richest man, Malik Riaz.

Asif is only the second Pakistani to win the world title, after Mohammed Yousuf, nearly 20 years ago, but his campaign nearly ended before it began.

A shortage of funds meant the Pakistan Billiards and Snooker Federation (PBSF) had practically given up hope of sending players to last year’s championship in Bulgaria until a slew of personal donations allowed Asif to board the plane.

The shy, softly spoken Asif repaid their generosity with a fairytale win, beating England’s Gary Wilson 10-8 in the final.

Now he has his sights set on matching the achievement of his professional counterpart Ronnie O’Sullivan, who in May successfully defended the world crown he won in 2012. “I am ready to defend my title and am confident I will win it again,” Asif said ahead of the tournament in Latvia starting on Nov. 27.

Asif helped Pakistan to victory in last month’s world team championship in Ireland and he said the experience has brought him added mental steel.

“The recent wins have boosted my morale and have matured my game. I have learnt how to handle the pressure, which is key in snooker,” he said.

All being well, Asif plans to turn professional next year thanks to a $20,000 sponsorship deal from entrepreneur Nadeem Omar.

Illustrious names like Jimmy White, James Wattana and Ken Doherty are all former amateur champions, with the Irishman being the only player so far to have held both the amateur and professional crowns.

Despite enjoying great popularity at amateur level around Pakistan, snooker struggles for funding and exposure in a country obsessed with cricket. While cricket stars earn good livings with big-money sponsorship deals and endorsements for everything from banking to shampoo, snooker is left to struggle on thanks to the efforts of dedicated amateurs.

But for Asif, there is no comparison.

“This is the best game. Technically there is a lot of joy in it, you have to beat your opponent by yourself whereas in cricket you have to rely on your teammates,” he said, noting that the sport had a distinguished history in Pakistan. “Our founder Muhammad Ali Jinnah also used to play this game.”