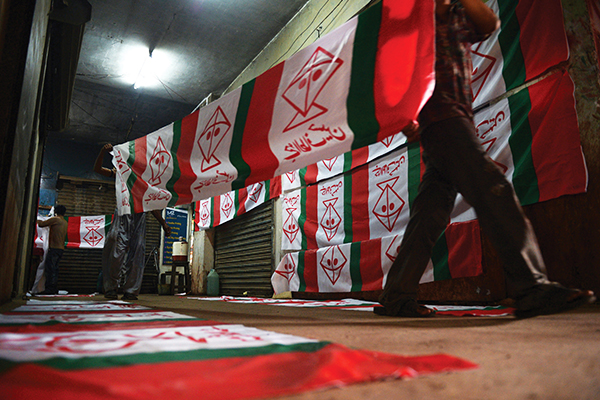 Those competing in the May 11 elections are nothing if not a colorful bunch.

Actors, pop stars, disgraced politicians, alleged terrorists, and even a former pinup girl—Pakistan’s freewheeling general elections have always attracted a motley crew of candidates. And as the country prepares for its first transition from a fully civilian-elected government to another, this year is proving no exception, with 15,629 candidates competing for the 849 seats in the national and four provincial assemblies. Here are some of the more colorful candidates of the 2013 elections, which take place May 11:

The Captain
Imran Khan
Just a few months ago, it seemed the elections were Khan’s to lose. Riding a tsunami of popular support, the charismatic cricketer turned philanthropist turned politician was poised to realize what had clearly been his ambition for over 15 years. But as elections drew closer, Khan’s light started to dim. Frustrated by various broken promises, some 100 disgruntled supporters stormed his house earlier in April, demanding a personal audience with the 60-year-old. Khan might be down, but he certainly isn’t out. One recent poll shows that while his support may have eroded some, his party, Pakistan Tehreek-e-Insaf, is in a dead heat with the Pakistan Muslim League (Nawaz), the second-largest political party in the country. His promise to create a “new Pakistan,” free of corruption and with more equal distribution of wealth, sounds attractive to many voters in a country with a vast chasm between the rich and the poor. The party has also mobilized the large youth vote, making Khan the wild card of the 2013 elections.

The Pop Star
Abrar-ul-Haq
This geography teacher turned singer swept the country’s music scene in the 1990s with the massive borderline-risqué hit “Billo De Ghar.” More recently, the 44-year-old has gained popularity for his philanthropic work. The Sahara for Life Trust, a nongovernmental charity he founded in 1998, aims to provide health care, education, and social services to Pakistan’s remote areas, where infrastructure is lacking. But Haq hasn’t forgotten his roots as a performer. Since joining Khan’s PTI in 2011, he has taken control of its youth wing and often sings at political rallies. Exhorting his supporters and fans to vote for a “new Pakistan” through poetry and prose, he has been cited as a major draw at the party’s massive and showstopping rallies.

The Showgirl
Musarrat Shaheen
The actress and former pinup girl, who gained fame for her raunchy dance numbers, competed in the 1997 elections but lost. This time she’s back as a candidate of the Pakistan Musawwat Party, going up against an Islamist candidate who is favored to win. Shaheen is also challenged by the lack of security in her constituency, located along the border of South Waziristan and home to Taliban fighters. Already there have been threats to her life from Islamists and fundamentalists alike. That, though, hasn’t stopped Shaheen from campaigning on a pro-women platform, noting that in her region she is the only female candidate in a male-dominated landscape. “I travel without security in my own bulletproof car,” she told journalists recently, and added that while she had learned of plans to kill her, she would walk on the streets to campaign without fear. Still, Shaheen’s history as a sex symbol might be too much for her conservative constituents.

The Radical
Ahmed Ludhianvi
One of the many candidates to strike fear in the hearts of minorities across the country, Ludhianvi is a radical Sunni cleric who has been accused of inciting sectarian violence against the minority Shia sect. The former leader of the banned Sipah-e-Sahaba, whose offshoot Lashkar-e-Jhangvi allegedly organ­ized the 2008 Mumbai attacks that left 164 dead, is nonetheless running on a platform of restoring peace of sorts to Pakistan. “If I get into Parliament, I will be able to save this entire country from bloodshed,” he told Reuters in a recent interview. Officials from his Ahle Sunnat Wal Jamat political party, meanwhile, have advocated banning members of the Shia sect from holding public office and suggested restricting their public religious activities. Despite preaching peace, Ludhianvi hasn’t completely abandoned his party’s sectarian ethos, which to some makes his promises sound like threats. As he told Reuters: “If I get into Parliament, everyone will be listening to what we want.”

The Indendepent
Badaam Zari
A woman running for elected office is nothing new in Pakistan, the first Muslim-majority country to elect a woman—Benazir Bhutto—to the top job. But Zari is the first woman from Pakistan’s staunchly conservative and strife-ridden tribal areas to run for office. Though she has never campaigned before, Zari believes that she can beat the 27 other candidates—all men—to win a seat in Parliament. Zari, who is herself illiterate, told Newsweek that she wants to improve access to education in her constituency. However, given that women in the region are expected to stay at home, it has been hard for her to campaign openly, and Zari has instead relied on door-to-door visits in which she persuades women to vote for her—and to tell their male relatives to do the same. Though Zari is a long shot in this archconservative area, she isn’t completely off the radar. “People from all over the region are calling us to lend support,” Zari’s husband told Newsweek.

The Transgender Candidate
Sanam Faqeer
Recognized by law as a “third gender” as recently as 2009, Pakistan’s transgender community is still on the fringes of society. Largely stereotyped as prostitutes, beggars, and dancers, transgender people are either dismissed outright or treated with ridicule and contempt. For Sanam Faqeer, however, that just means they have a blank slate to work with. “We don’t need to collect wealth and build villas for our next generations by stealing people’s money as other politicians do,” she told AFP, referring to the perceived primary cause for corruption among Pakistan’s politicians. The 38-year-old is one of seven transgender candidates competing in the elections this year. It is the first time the estimated community of 500,000 (there are no official statistics) has endeavored to seek change through the political process.

The Bomb Maker
A. Q. Khan
The 77-year-old “father” of Pakistan’s nuclear bomb won’t be competing personally in the elections this time—but various candidates across the country will be representing his Tehreek-e-Tahaffuz-e-Pakistan party. However, despite a nuclear missile as his electoral symbol—a source of great amusement for his supporters and detractors alike—it’s doubtful that Khan will create much of a bang in the 2013 elections. Political observers say that, since his name won’t appear on the ballot, Khan is unlikely to attract many votes.

The Former P.M.
Nawaz Sharif
The Pakistan Muslim League (Nawaz), headed by the two-time former prime minister, is the odds-on favorite to emerge as the ruling party once the dust settles after polling day. This places Nawaz Sharif in the best position to take the reins of power once again. The 63-year-old last competed in the 1997 elections and went into a seven-year exile in 2000, a year after Pervez Musharraf overthrew his government in a bloodless and popular coup and placed the country under direct military rule until 2002. After the last elections, when Pakistani courts questioned whether he would actually be allowed to hold public office, Sharif’s personal political career appeared over. But much like the mythical phoenix, Sharif has reemerged and is now considered the frontrunner. However, if Sharif wants to take back the prime minister’s office, he might finally have to learn to compromise: several surveys indicate a tight race that will yield a hung Parliament making burdensome alliances necessary.